(1898-1962) The doors of this rural schoolhouse have not stayed entirely closed with the end of classes.

Eunola is the last remaining one-room schoolhouse in the Rural Municipality of Edward. It is located about 13 kms north of Pierson, just over a kilometre west of the Hwy 256. Unlike most rural schools, whose doors were closed permanently in the 1960s due to consolidation, Eunola continues to be a social centre.

The Need for a Schoolhouse

The first settlers to arrive in the district were often young men or young couples. For the first few years there was not much need for a schoolhouse, because there simply were not enough children to warrant one. However, by 1898 the situation had changed. Until a proper schoolhouse could be built classes were held in a vacant house that was rented from James Phair for the purpose. 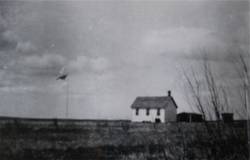 The Eunola schoolhouse before it burned down in 1937 and rebuilt.

Eunola School moved around several times before settling at its present location. The original building cost $508 to build, and consisted of one room with three windows on either side. A porch on the south end of the school provided space for children to leave their winter boots and coats. Just beside the porch was a woodshed where the student who was hired (for a very small amount) to start the fire on cold winter mornings would get the wood for the potbelly stove.

In the early morning of April 1937 the school burned to the ground with all of its contents. The loss of a schoolhouse was a big shock to both teacher and pupils. In its absence, neighbours Andrew and Paul Hendry offered the use of their home for classes to continue. Students took their lessons here for the remainder of the year, and again in the fall until a new school could be erected.

The second Eunola School was an improvement over the first one. It had a full basement with a furnace, plus seven big windows on the east side. The new school opened in November and operated for the following 25 years.

The schoolhouse was the community centre for the district. Church services were held there in the summer and Sunday school picnics took place on the grounds. The building served as a meeting place and a venue for holding community dances. At these events all of the desks would be pushed to the walls to make room for the energetic attendees who danced to the tune of local talent until two or three in the morning.

The United Farmers of Manitoba (UFM) held their meetings in the school. They built an open-air skating rink across the road to the south which was greatly enjoyed by the schoolchildren. UFM also bought a piano for the school.

The Eunola picnic in June was always a popularly attended event, and many people travelled great distances to take part in the fun of the day. Children’s softball games were followed by men’s hardball. Horse races took place across the road, where farmers would race their farm horses. Everyone brought a picnic lunch, spread blankets out in the shade of the nearby trees, and enjoyed a meal with friends and family. The school picnic was finished off with a dance in the evening.

Eunola School was closed at the end of the school season in 1962, and the children of the district were sent to Pierson to receive their education.

The building was revived in 2006 when former students and local residents got together to restore the building. The windows were replaced and the walls given a fresh coat of paint. The school and schoolyard have been kept alive by continued activity, including an annual picnic. The inside of the school is furnished with the original teacher’s desk and double student desks, which bear the carvings and penmarks of bored students on their surfaces. Classes from Pierson make a field trip out to the site to eat their lunch and receive a lesson in the old building, getting a feeling for what school was like for a different generation.

The building remains as a reminder of the past and a joy for the present.

Lining the west wall of the Eunola Schoolhouse are pictures of all the teachers who have taught there. It was common for teachers to spend only one to three years at the school—partly a result of it’s remote location. Most of the teachers, though, were young women who were soon snatched up by a young farmer in the region.