"Not Being Able to Get From There to Here"

The Blue Flea line was unique among railway lines. It was the only route that offered passengers the opportunity to jump from one line to another (much like a flea, thus one hypothesis behind its name). Generally railway companies strenuously resisted crossing tracks with another rail line. And even when these rare occurrences did take place (such as the Canadian National Railway and Great Northern Railway at Minto) the services necessary to exchange passengers or goods from one line to another were not present. The Blue Flea zig-zagged back and forth between the towns that had more than one station, solving the problem of “not being able to get there from here.” 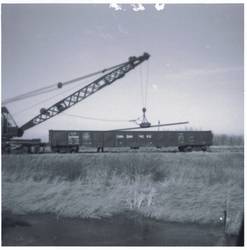 The lifting of the Lauder Subdivision. CREDIT: Boissevain and Morton Archives

The Lauder Subdivision of the CPR (which came to be known as the Blue Flea) was constructed due to a request which came from one Thomas Dand. Thomas Dand and his son James Morgan Dand had moved to Manitoba from England in 1882 closely following the death of Thomas Dand’s wife (James’ mother). They had been living in Exeter where Thomas worked as an engineer. It was due to his guidance that the city had one of the most state of the art water and sewage systems in England. Arriving in Canada, the Dands were put in charge of building bridges through the Kicking Horse Pass in B.C. for the transcontinental railway. When they were finished, they looked for a place to homestead and settled north of Whitewater Lake in southwest Manitoba.

At the time when the Dands moved into the area, farmers were hauling loads of grain to one of the surrounding communities by wagon—Deloraine and Hartney were both over 15 kms away. Hauling grain was a tiresome practice, made more difficult by blizzards in winter and heat and mosquitoes in summer. Thomas, having worked on the railway, knew where and which questions to ask. Specifically, he asked his friends from the CPR to build a railway line that would connect Lauder with Boissevain. The CPR agreed to lay the track, but there were numerous delays. In 1911 the first survey was made, but the suggested route lay too far north and ran into problems around the Chain Lakes; and yet to go too far south would put the line in danger of being swamped by Whitewater Lake. Thomas Dand took the issue into his own hands and walked a line from Lauder to Boissevain. The railway accepted his suggested route because of his long history as a talented engineer.

The laying of the track was finished by November 1913 when the first train chugged along the route. Trains that travelled along this stretch of railway left Boissevain and visited the stations of Sanger, Schaffner, Orthez, Croll, Regent, Hathaway and Dand before reaching Lauder. Station “Dand” was at first known as “Landmark” before it was renamed to honour the Dand family’s role in getting the railway to come through the region.

As for the Dand family, Thomas Dand had only a handful of years to enjoy the railway before he died in 1920. James had married Lena Saunders in 1902 and they took over the farm where they lived until 1945. James died in 1949 and his wife soon after him.

There is some disagreement over where the Blue Flea went exactly. Some people associate the name specifically with the Lauder Subdivision; that is the 35.3 miles (56.5 kms) of track between Boissevain and Lauder. This section of track was exclusively used by the Blue Flea trains, which were smaller and lighter, due to the soft, slough-ridden ground north of Whitewater Lake where the track was built. Some argue it is more accurate to associate the name with the service, which travelled on CPR rails as far west as Lyleton, east to Boissevain, and north to Brandon.

The line’s popularity grew and eventually declined due to customer demand. The Blue Flea trains ran a passenger service that bridged the different branch lines and ran on alternate times from the big passenger trains out of Winnipeg. The trains also transported hay, grain, milk or whatever the present demand was.
In 1958 and 1959 service was restricted to a mixed train (passenger and goods) on only Mondays and Fridays. After October of 1959 service operated on an “as required” basis. By 1962 there was no passenger, communication or mail service on the line.

In 1962 an application was made to abandon the Lauder Subdivision due to the fact that “after a study of the revenues and expenses the [Lauder] Subdivision has shown that the operation of this line is unprofitable and that its abandonment would be feasible, desirable and in accordance with public interest.” The surrounding CPR lines had a carrying capacity of two million bushels, whereas the Lauder Subdivision could handle just over 300,000 bushels. By this time also, good gravel roads connected all centres in the area and most personal travel was being accomplished by automobile. The odd train still travelled along the track— occasionally a train would come out from Lauder, pick up grain cars in Dand and carry on to Croll, but then it would head back to Lauder. The track no longer offered a connection opportunity in Boissevain, and the days of providing a dependable service were over.

Dand had once enthusiastically welcomed four trains a week. After the railway stopped operating the community—complete with school, church, stores and grain elevators— lost its lifeline.

The tracks of the Lauder Subdivision were removed from their bed in 1976. A magnetic crane was used after a machine went before it to pick up and pile the ties. The job was completed by 40 men at the rate of one mile per day.