The Adventures of a Radar Repairman 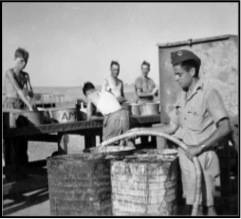 On August 25, 1942, off the coast of Scotland, a plane crashed into Ailsa Craig, a rocky “chunk of mountain” in the North Sea. The brother of King George VI, Prince George, also known as the Duke of Kent, along with 14 Royal Air Force comrades, died in the crash.

Staff at the Royal Air Force Radar Station, at North Cairn, Scotland, were using the innova- tive Radio Detecting and Ranging (RADAR) device to track flights. They watched helplessly as they saw the situation developing. They had no knowledge about the craft involved and were under strict radio silence.

Alton Breault was there.

In Lanciano, Italy 1944 Field Marshall Montgomery and Winston Churchill, on a tour of battle zones stopped for a bathroom break. They were directed towards the outdoor latrines and advised to be careful with roughly cut wooden seats.

Alton Breault was there.

In between these incidents, Mr. Beault spent time in Durban, South Africa; was posted in Pales- tine; climbed a pyramid in Egypt; and participated in the invasion of Sicily.

How did a small town boy from Deloraine get from here to there?

It all started when Alton was serving his compulsory basic training at Winnipeg. During a Colonel’s inspection, the P.A. sys- tem malfunctioned. The trainees were asked if anyone knew how to fix it. It so happened that Alton, a ham radio enthusiast, had just that sort of experience. He and a few others raised their hands. The next thing he knew, he was being re- cruited into the Royal Canadian Air Force (R.C.A.F.) at two grades above the usual beginners rank, and given the Trade Designation WEM(R). He knew that the letters stood for Wireless Electrical Me- chanic. What the R stood for re- mained a secret – as were the other details of his posting.

It wasn’t until he was overseas that he learned that his wartime duties would involve something they called Radio Direction Finding, and that he would be trained as a Radar Mechanic.

Alton’s interest in ham radio, and electronics in general, started in his youth. In those days, partly due to the depression and the general lack of cash, and partly due to the na- ture of the technology, a radio enthusiast usually built or assembled his own equipment. One had to have more than basic electronic skills. That made him a perfect candidate for the new field of RADAR, which was be- ing aggressively pursued for the military advantages it offered.

It was top secret - he and his companions at the training facility at Yatesbury, England, couldn’t tell even their servicemen buddies what they were working on.

His training and meant that he would be transferred to locations many servicemen would never see. He was in for a rather unique wartime experience.

Best of all, Alton was often in a position to make good use of his special skills, his natural intelligence and problem solving ability.

One night at North Cairn Radar Station, early in Alton’s deployment, an operator doing routine tracking of flights became quite concerned when a nearby flight disappeared from her screen. A search mission was dispatched. Alton, who was on duty, wondered if he might not be able to see something by climbing the signal tower.

He was right. When he got to about the 150 foot level of the tower he was able to spot a blinking light offshore. In addition to his technical/mechanical skills, Alton had also mastered Morse Code for his ham radio hobby. This enabled him to recognize the SOS signal and he was able to use Aldis lamp to signal Air Sea Rescue. The result was a successful rescue mission and four lives saved.

As Alton himself said, decades later: “There’s a little example of carrying around a little extra knowl- edge of some- thing unrelated to one’s job at hand.” 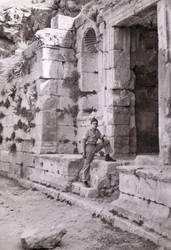 These stories and many more can be found in Mr. Breault’s excellent book, “Live and Learn, A Radar Mechanic Recalls Experiences During World War II.”

Alton recorded his adventures in a carefully organized and well- presented photo album that he sent home from the front. It has been placed online at: http:// www.mts.net/~altonb/ walbums.htm

After the war, Alton came back to Deloraine and went into the radio and T.V. repair business.