The Brockinton archaeological site is located along the Souris valley wall south of Melita. This site was occupied by three different cultures over the last 1600 years. These occupations left behind rare and archaeologically invaluable finds.

Most recently, an indigenous group known as the Williams culture used the location as a camping site which dates back just over 400 years ago (1600 AD). This was a group of plains First Nations who were primarily dependant upon the bison. They produced uniquely decorated pottery pieces: small bowls with twisted cord impressions in triangular and horizontal patterns and tiny stamps created using materials such as reeds, bird feathers, quills or tiny bird bones. Some of the pottery pieces have a more broad decoration with smoother surfaces. These pottery fragments suggest a tie to the Oneota culture in southern Minnesota or Iowa. The Oneota included several groups that occupied the area of these states between 1000 and 1650 AD. Significantly, the Brockinton site was the first excavated evidence of the Williams culture. 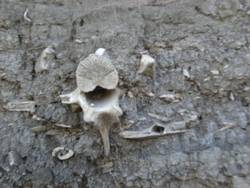 A layer of bison bones in the Souris River's bank at the Brockinton Site.

Going back another couple hundred years, the Duck Bay Culture utilised the site for camping sometime between 1100 and 1350 AD. They were a group of woodland First Nations who adapted to the seasonal bison hunting of plains people. They adopted a number of traits found in plains cultures, such as the use of Knife River flint which came from western North Dakota and was used for tool-making. Another trait that was adopted was the use of a flat milling stone with which they ground up seeds. Artifacts found at the site from this era include: sherds of large woodland pottery (distinguished by cord wrapped impressions and shallow stamps), endscrapers, bifaces and three mini stone awls. Also found were projectile points with broken bases that had been abandoned when arrows had been repaired with new points. A channelled sandstone abrader for smoothing wooden shafts was also found, a rarity in Manitoba. The animal remains discovered at the site reflect a mixed economy fed by bison, canines, beaver, deer and fish.

During its earliest occupation around 800 AD, the Brockinton Site was used as a bison kill and butchering site. Indigenous peoples used the contours of the landscape to drive bison down the valley to the riverbank where they built a structure known as a pound. The pound consisted of a collection of posts driven into the ground in a row among the trees growing on the bank. The structure was about 1.5 metres thick and held together using horizontal branches and saplings intertwined among the posts and trees. Gaps in the structure were covered with hides. Bison would then be herded down the steep valley of the Souris River to run tripping and tumbling into the structure. This proved to be an efficient method of killing bison with a minimum of bone breakage. The site has yielded a fantastic number of small side-notched arrows, ranging from 10 to 45 pounds of material per square meter.

The pound at Brockinton was a rare find, not so much because of its use, but rather what was done with it after it had served its purpose. Though evidence suggests that the site was hurriedly abandoned, extreme care was taken in leaving the landscape as it had been. After its use the pound was dismantled to the point that the holes left by the posts were filled in with vertically placed bison bones. The site is one of the first and certainly the best documented cases of such a rare occurrence.