Why has almost every small town in Manitoba have at least one Chinese establishment?

Hidden paragraphs in the pages of largely Euro-centric local histories briefly acknowledge the existence of the Chinese in the early years of prairie settlement. But though these books mention the presence of Chinese laundries and restaurants in the rural communities of southwestern Manitoba, they do not offer anything more than the fact that their establishments existed. They provide no detailed history or broader context into which Chinese prairie settlement fits.

Curiosity prompts the question: how did the Chinese end up here? What was attractive about the prairies in the late 1800s and early 1900s that caused individuals to seek lives in rural communities, to work long hours while being far removed from their families and culture?

From the East, From the West

The population of the prairies at that time was made up of Aboriginal inhabitants and European settlers. The Chinese were unlike any settlers the prairies had seen. They were single men who came into towns and villages in small numbers to run the local laundry or set up a restaurant. They spoke a markedly different language and had strange customs. While most prairie pioneers came west from Ontario and Quebec, if not Europe itself, the Chinese newcomers arrived from the opposite direction. 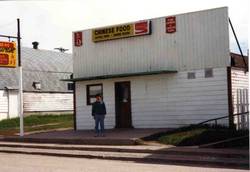 Pictured here: Wing Ho Restaurant of Boissevain. In 1993 Terry and Ling Choy bought the building and turned it into Choy’s Restaurant.

Chinese immigration to Canada began around the middle of the 19th century in response to the gold rush in British Columbia. When the transcontinental Canadian Pacific Railway line was being built between 1881 and 1885, Chinese men were encouraged to immigrate to provide labour for the project. As soon as the railway was completed, however, the Canadian government wanted nothing more to do with them and moved to restrict Chinese immigration by imposing a $50 head tax. No other group in the history of Canada has been forced to pay such a tax.

Chinese men continued to immigrate regardless of the head tax. The pull towards Canada in search of a better life was at least equalled by a push from inside China. In the 1850s, political weakness in the face of social turnoil (culminating in the Taiping Uprising of 1851-1864) foreign intervention and repetitive natural catastrophes (drought and earthquakes) were all contributing factors towards emigration away from China. Almost of more importance, however, was China’s increasing population. Areas of China with the least amount of arable land and most crowded populations produced the highest numbers of international emigrants as the pressure on farmland increased.

Immigration into Canada was not an inexpensive venture. At first only the very rich or those with work contracts could afford to pay the expensive ocean liner fare across the Pacific to Vancouver. Canadian immigration policy generally worked to stringently discourage Chinese immigration. The head tax was raised from $50 to $100 in 1900, to an exorbitant $500 three years later (which is equivalent to two years wages for a Chinese labourer). Canadian policy went so far as to effectively cut off Chinese immigration altogether between 1923 and 1947 by passing the Chinese Immigration Act. This Act allowed only merchants, students and diplomats to immigrate. During these 24 years fewer than 50 Chinese were allowed into Canada.

The unfair and racist slant of Canadian immigration laws moulded the early Chinese experience in Canada, especially in the respect that women and children were for the most part absent until after 1947. The Chinese Immigration Act prevented men already living and working in Canada from bringing their families from China to live with them. Such legislation had a huge impact on the development of Chinese families, resulting in the development of a “bachelor society” among the Chinese in Canada. Some men who immigrated never married because of the distance and time they spent away from China. Others who left wives in China found it difficult to return due to the cost and a fear that they would not be let back into Canada if they left. They spent their lives in Canada as bachelors, never reconnecting with family overseas before their deaths. Other married men found ways to return to China for brief visits, though often incurring massive debt due to the cost of travel. Sometimes they arranged for a son or nephew, and in later years wives and children, to return with them.

Most who came to Canada from China remained in British Columbia. At this time Manitoba was an outpost where few stayed. But precisely because of that there were more jobs available, higher wages and generally friendlier people than could be found in British Columbia or Canada’s larger urban centers. The populations in Manitoba and other prairie provinces were much smaller than BC or Ontario and though the largely European settler population may have preferred business owners who spoke good English, they welcomed and appreciated the laundries and restaurants run by Chinese entrepreneurs.

Chinese first began settling in Winnipeg around 1870. Soon afterwards Brandon and rural prairie towns saw Chinese men in their communities as well. The first Chinese laundryman to settle in Brandon was in 1884. By 1901 the Manitoba census listed an all-male population of 206 Chinese men living in Brandon. Ten years later this number had risen to 885. The majority of Chinese immigrants worked in the laundry or restaurant business. Those with higher levels of education and better English skills could work as travelling salesmen. However, the restaurant is most commonly associated with the Chinese as an occupation. Opening a restaurant was a relatively logical thing for an immigrant to do as it required no specifically Canadian skill-set. Even English was not a necessary requirement as the universal language of hungry bellies served to overcome the language barrier. Especially in the early years, meals served in Chinese restaurants were largely improvised in the absence of authentic Chinese ingredients.

Life was difficult for Chinese settlers on the Manitoban prairies. The summers were hot and dry and the winters cold and accompanied by deep snow. Yet they worked through the difficult conditions without nearby families and sources of support. In rural communities the Chinese restaurant and laundry owners learned English to make friends with their customers and others in the community in order to make a living. Yet the hard work and long hours made little time available for socialising.

Most towns in western Manitoba had a Chinese restaurant at least until the 1950s. They made important contributions to rural Manitoba and fostered fond feelings among their customers and neighbours.

Today, Chinese restaurants continue to be a focal point in southwest Manitoba’s communities.

Pierson, 1929 – 1940. In 1929 Alex Ying, a young Chinese man in Melita, bought a cafe and remodelled it into a very up-to-date establishment. He sold groceries, meats, confectionaries and served meals and short orders. In 1940 he leased the building and moved to Brandon.

Melita. The building that was to become the Carleton Cafe was owned and operated by Ho Wing and Mark Jing. They sold it in 1921 to W. D. Hoe, who in turn sold it in 1926 to George Yum. In 1928 Alex Ying bought the business and put $10,000 of renovations into it, calling it the Carleton Cafe. Joe and Normon purchased it in 1932 and operated it for 10 years until Frank and Jack Yuen took over. The cafe closed for good in 1967, after which the building was torn down.

Boissevain. At one time all of Boissevain’s laundries were operated by Chinese men who rarely advertised their services. Little is recorded about them, except that Boissevain had at least one for many years. The earliest record of a laundry in Boissevain is 1891, (though it could possibly be earlier) when Sam Long had a Laundry where the MAFRI office is today on South Railway St. In 1935 Wo Soon Hoy died from pulmonary thrombosis after providing laundry services to Boissevain residents for many years.

Deloraine. Shih Ping Chan and his son Ning Chen of Brandon moved to Deloraine in the mid 1990s and bought a building on North Railway from the Town of Deloraine. They renovated it and opened for business in February of 1995, serving both Chinese and Western foods. Shih Ping made a visit to China in 1997 and returned with Ai Ping Chen who also works at the restaurant. The name of their establishment is “Hoy Sun Chinese Restaurant.”

Lyleton: A local report of the friendliness of rural Manitoba is given by Suez Yuen, whose husband, Tom Yuen, ran a café in Lyleton, Manitoba. In her words: “Lyleton people, old and young, are very friendly. I can’t find a place where people are so friendly, not in China, not in Hong Kong, not in any other place in Canada.” Tom Yuen arrived in Lyleton in 1940 and his wife followed in 1951. The townspeople of Lyleton were very helpful during the busy time of the Second World War, helping Tom in his café by volunteering to wash dishes and sell ice cream and soft drinks.

---. “Everyday Religion and Identity in a Western Manitoban Chinese Community: Christianity, The KMT, Foodways and Related Events.” The Journal of the American Academy of Religion 77.3 (September 2009).

---. "The Way of the Bachelor: Early Chinese Settlement in Manitoba." University of British Columbia Press, February 2011.

Wickberg, Edgar, ed. "From China to Canada: A History of the Chinese Communities in Canada." Toronto: The Canadian Publishers, 1982.