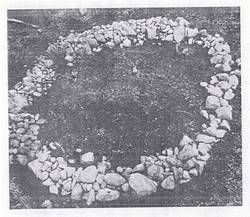 One of the circles that was discovered at the Dand site.

It is a mystery of the most intriguing sort that the story behind five stone features located on a quarter section 4.5kms southeast of the hamlet of Dand remains untold. In the absence of real knowledge concerning the site’s history, we have only archaeological facts and theories with which to paint a picture.

The quarter section was homesteaded by James Morgan Dand in the late 1800’s. He didn’t allow anyone to use the land – not even for animal grazing. Mr Dand is reported saying that the site under discussion was visited annually by First Nations. Meanwhile the stone features were known about locally and the stone walls were used as blinds for shooting geese in the mid 1900s.

Dand’s land was cleared after it came under new ownership and the stone features were then brought to light. Locals William Moncur and Bill Ransom brought the site to public attention which led the Parks Branch of Manitoba to arrange a one-year lease of the property from the owners. In the spring of 1967 the site was mapped out and investigated by a Parks Branch survey team and excavated by an archaeological team made up of graduate students from the Department of Anthropology at the University of Manitoba.

The site was located in a dry slough depression surrounded by a grove of poplars and was made up of two massively constructed stone oval rings, another smaller oval and two well constructed stone walls (in addition to two mostly destroyed walls). The date the structures were built is unknown and the function of the site was not discovered by the investigation team. It was noted that the stone walls are dissimilar from any European structure in the vicinity and point to the probability that the site was home to an Aboriginal occupation or activity.

Exactly what the stone features were used for, however, remains a mystery. The two large ovals and the larger of the two walls were built out of uncut fieldstone with incredible care. Stones were placed in two concentric circles and the space between filled with smaller stones. The ovals were devoid of evidence pointing towards an entry way, fireplace or storage pit. Despite an intensive archaeological dig inside the largest oval, nothing was unearthed, offering no illumination towards its function.

After some research, no examples of similar structures were uncovered. Though rings of stone are common on the prairies and boulder effigy monuments exist in Montana and Saskatchewan, neither flaunt the massive double-row construction of the features found at this site.

The site may be somehow related to the “war lodges” in Montana and Alberta known to have been used by Kutenai and Blackfoot people. It is true that some of them were made out of stone and were located in low secluded areas but are otherwise dissimilar from the Dand site. Another possibility is that the formations at the site were built to reflect information of astrological significance and the features that would have created the critical alignments to give this theory weight may have been destroyed prior to investigation. Working against this theory is the site’s location in a depression; sites on high ground or at least a flat plain were favoured for astrological sites.

It is deeply unfortunate that the answer to the burning questions left by the Dand site is destined to remain a mystery. The lease on the land ran out and by 1968, when a member of the investigative team returned to the site for a visit, the features had been destroyed by land clearing operations. There remains no trace of the site today, a tragedy in the face of the absence of a parallel example anywhere in the archaeological literature.

It is a mystery of the most intriguing sort that the story behind five stone features located on a quarter section 4.5kms southwest of the hamlet of Dand remains untold. In the absence of real knowledge concerning the site’s history, we have only archaeological facts and theories with which to paint a picture.