Up until 1959, Wednesday was train night in Mountainside. That’s when Ben Arde would drive his car to the nearby station, back it up to the platform, and load up supplies for his grocery store. In the winter, he’d sometimes put the freight on a toboggan and pulled it home.

He remembers a few stories from those times that are worth passing on.

“Funny little thing, I remember on Wednesday night, sometimes it would be late, way-laid with freight and one thing and another. So we phoned Horton to see if it was there yet, because we had to wait up sometimes to 11:00 at night, waiting for the freight. I remember we used to phone this guy in Horton. Herb Hardy was his name, he was a real Englishmen. When you phoned on the railroad line, what you did was you rung the number for whatever station it was, but you didn’t lift the phone and wait, you left it. But when the guy went to answer it, “Ding, ding, ding”, about two dings of the thing and then you’d go and answer. It was kind of the wrong way about it. And he’d always say, “Herb Hardy from Horton speaking.”

The extension of the CN line from Adelpha on to Deloraine brought service to Mountainside and area.

The extension of the CN line from Adelpha on to Deloraine brought service to Mountainside and area.

Waiting for the train…

On one particular night, Ben was especially concerned as he was expecting the annual shipment of shotgun shells for duck season.

He phoned down to Horton and was told that the train had left two hours earlier. It should have been there long ago!

When the train did arrive he was told the order had been tampered with and some of the shells were missing. It seems that the train crew were hunters too, and along the way the ducks had beckoned in an irresistible manner. The engineer stopped the train while he, the conductor, and the baggage man had a “bit of a hunt.” Such a good hunt in fact that they ran out of ammunition. No problem, there just happened to be ammunition right there in the freight.

When the train finally got to Mountainside, near midnight, Ben was asked to just sign for the “reduced” amount of the shipment and told all would be made well.

You had to make allowances!

Sid Ransom tells us about how the train service was used locally as well as for long to trips to the city and beyond.

“I recall our neighbour Pete McQuorquodale who was municipal councilor for some 30-odd years and I can recall him in real bad weather, when the roads were blocked and so on, he’d get up very early in the morning and drive the team down to Whitewater and put his team in the stable there for the day and catch the train about half-past six in the morning, attend the council meeting and catch the returning train late in the afternoon from Boissevain and back to Whitewater again about 6:00 and drive home again. A real difficult sort of a day. “ 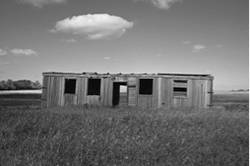 The boxcar that served as the "station" at Wassewa would have looked something like this photo of Hathaway Siding (which was still standing in 2015, six kilometres east of Dand.)

This boxcar which served as the “Station” at Hathaway Siding, stands by the side of the Dand Regent Croll Road six kilometres east of Dand.

Sid also tells us about the arrangements for shipping cream and eggs from the Wassewa Station.

“ it was an old box car with an old-fashioned pot-bellied stove square in the middle and a bin of coal at one end that was supplied by the railway. And if it was wintertime, the first one to go down was with his cream and eggs would light the fire and warm the place up and keep the eggs in particular from freezing. And then, of course, the later ones that come along would put a little more coal in the stove and keep the place warm and this was the case at every platform, every siding, they all had their quota of cream and eggs. Sometimes the train then would be late at night and they wouldn’t bother picking it up. They’d say, “Oh we’ll get it in the morning.” But maybe the weather turned extremely cold during night and sometimes the eggs got frozen before they got along again in the morning.“

I guess it was the only game in town.