Mr. Dobbyn dreamed of a city bearing his name.

On February 5, 1884 the Brandon Sun reported that a “Grand Rally of Farmers” had recently been scheduled at Dobbyn City, and added that as, “Dobbyn City does not have a building that has a roof”, the meeting took place at the nearby tiny settlement of Menota. The author of the submission is not recorded, but there is no mistaking the sly reference to the overblown promotion of Manitoba’s “Speculative Cities”.

The years 1881 and 82 are remembered for the “Manitoba Boom”. Across the province rumours of rail lines prompted the creation of “cities” which were created on paper and aggressively marketed. Extravagant claims were made. Each site was to be the next big thing. By buying into one of these boomtowns one was betting that the rail line would pass through and the paper city might well become a reality.

John Dobbyn, a homesteader near where Melita would later be located, had selected land near the Souris River where there was the general belief that a railway line would soon pass. In the spirit of the times, Mr. Dobbyn had “Dobbyn City” surveyed and marketed.

It was the region’s most representative example of the paper city. It was just plausible enough to be sold with conviction, but the claims wouldn’t pass today’s truth-in-advertising laws. Look through the ad and see if you can separate the blatant lies from the mere wishful thinking.

Apparently the ads worked… for a while. In March of 1882, The Winnipeg Daily Sun reported the sale of 80 lots at an average of $30 each. How much, if any, of that money made its way into Mr. Dobbyn’s hands, no on knows. 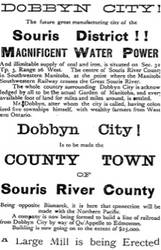 The railway did eventually come in 1890, but Dobbyn City was long forgotten and the river was crossed about a mile further downstream. Mr. Dobbyn had long since focused on his farm, and became a leading citizen of the new town of Melita.

Was there no one overseeing the fraudulent claims of the promoters? It doesn’t seem so, although in the case of southern Manitoba’s most outrageous land swindle, the town of Moberly, (See Vantage Points V1, p26.) there was an arrest and B.B. Johnson of Emerson MB was forced to pay back some $4000 of his ill-gotten gains. As for the other Boom Towns – I guess the hapless speculator was fair game.