The First Phone in Boissevain

Let me begin with a personal experience.

Not long ago my mother told me a story about my Uncle Lex, her older brother. It seems that when visiting his “town” friends he couldn’t help but notice how convenient life was for them. Electric lights, for instance, seemed like a really good idea. So instead of just accepting that doing without modern conveniences was a given, he learned how electricity was made and it seemed sort of simple. He needed a generator and a way of powering it. They had a windmill right near their house, used for pumping water. Why wouldn’t it power a generator? Soon the Young family, out there in Dry River, had electric lights! Rural electrification for more patient people was still a decade off.

So when I learned about Boissevain’s first telephone I wasn’t surprised.

No doubt Arthur Aitkens, his brother Frank, and their friend Robert Hurt, had visited the city and seen what a convenience the telephone could be. It was 1900, and as Boissevain wasn’t yet ready to join that revolution, they went ahead on their own. They strung clothesline wire between their houses, hooked up receivers and speakers, powered them with a battery, and …it worked. The town did catch up in a few years. In 1904 a local exchange was located in Hilton's Drug Store, but only a few residences were hooked up. Then in 1906 the Bell Telephone Company began installing its own phones in Boissevain homes. Soon they had twenty-four hour telephone service, and lines were being run out to rural subscribers. By 1907, 125 phones were in use. 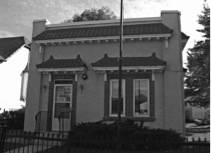 By the 1930's the Maniotba Telephone System had developed standard plans fro small rural offices. Many iconic little buildings like this one in Boissevain have been put to new uses.

Direct dial systems were a long way off. All calls were routed through an “operator”.

Alice Hurt, in “Turtle Mountain Corduroy”, gives us a colourful description of the functions served by the operator, or “Central”.

"Central was the source of all general information. She knew if the doctor was in or was on call, if Willie was on his way home from school, if Grandma Jones' cold was better, if Mary's baby had come yet, and the "correct time." The telephone office gave real homey service to the community. "Central" called people in the morning, let them know if the train was late, also if it was time to take the bread out of the oven. She helped in any emergency, be it fire, flood or a hunting accident, even when a murderer was lurking in the vicinity. She sent help in case of sudden illness or home accident. " “Central” also knew their community. In Deloraine, they held all calls to the Manse while a wedding was taking place there. The Manitoba Telephone System was soon established and took over the rural operations in its provincial network.

Manitoba Telephone System - Boissevain Staff. It took a lot of work to keep people connected in 1912.

The number of rural customers grew and dealing with those numbers was a challenge, given the existing technology. The solution was that fondly remembered innovation – the Party Line. Here’s how it worked. If you wanted to make a call you picked up the receiver to see if the line was free. If you were calling someone else on the same “line” you used the hand crank to “direct dial”. Each person on the line had signal – sort of like Morse Code. Ours was two long rings and one short. Our neighbour, Joe, was one long, one short. If I wanted to speak to Joe I gave the crank one long turn and one short one. Joe would recognize his “code” and answer. Other neighbours would know that someone was calling Joe and ignore the ring. The handy thing was that if Joe was visiting our mutual neighbour Charlie, and heard his home number, he could answer from there. The down side was that if any of the neighbours were really curious about who was calling Joe, and why, they could quietly pick up the receiver and listen in. It was an art form. And today we think Facebook and e-mails are unsecured communication. If you wanted to talk to someone not on your line you dialed the Operator, usually just one long ring. They took it from there – it was the World Wide Web of its day. One can only imagine the difference this service made, how it must have alleviated the sense of isolation, how it enhanced both commercial and social transactions. What was, one day, an exciting new aspect of the modern world, became indispensible, and we soon didn’t know how we could have ever lived without it. FYI: the last two exchanges in the region were changed to dial in May of 1976 in Hartney and Killarney.