Fultonville wasn’t a town. It wasn’t a railway siding or even a post office. Those things got put on the maps. It was a family-based cooperative. The expenses, profits, and presumably the work, were shared equally. The people who formed it were urban dwellers who for some reason decided this was the life they wanted. Not an uncommon story as far as that goes.

Back to the Land

The Fulton family was well-established in Glasgow, Scotland but, prompted by promotional materials such as “The Last Best West”, put out by the Canadian Government, they were willing to trade the comforts of city life for an adventure on the frontier. There is also a hint that they had a romantic view that contrasted the pastoral, natural life with the “dusty streets” and “other paraphernalia incidental to the drama of city life.” The patriarch, Samuel Sr. was apt to comment on being “out here with only the sky above…” as opposed to being “surrounded on every side by the product of centuries of civilization.” It was probably complicated, but they came.

George, James, and Samuel Jr. arrived at Pierson in 1902. They took work with local farmers to get some first-hand knowledge of farming. By the next year they had filed homesteads on 6-4-29 and built a small frame house, where they were soon joined by more brothers. 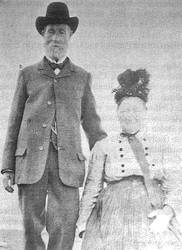 Later that spring their father Samuel Linn Fulton and their mother Betsy bought passage to Canada on the S.S. Sarmation along with the remainder of the family.

The family brought with them a wide range of skills and backgrounds, but no agricultural experience. The oldest son, William, was a draper, Samuel Jr., had studied for the ministry; Alex, was a jeweler, George, was an engineer, James, a classically trained violinist and young Bob had apprenticed to a carpenter. They were an educated family, deeply concerned with religion and politics, and considered themselves progressive and open-minded to modern farming methods. They filed for a block of adjoining homesteads. A legal partnership was drawn up with the father named as arbitrar in the case of disputes.

They were to be hands-on farmers, not lords of the manor. "Fultonville", as the locals dubbed their venture, started off with three horses, a walking plow, a hoe, some pickaxes and a spade. They bought two cows, one sow that produced six little pigs, a few hens and some ducks.

Mistakes were made, and inexperience took its toll.

The first winter, fifty chicks died because they hatched too late. They didn’t plant enough potatoes. When the cows dried up, and the hens stopped laying eggs, they were a little short on food. They had flour, but Betsy and her daughters-in-law had little experience baking and they often had to toast the bread to make it edible. They got through the winter however, and learned from their mistakes. They were patient and were willing to wait for comforts and luxuries. Things came around. Progress

By 1907 they where able to afford luxuries like an Indian pony and a buggy to take them to church at Eunola School, five miles distant. The family continued to expand. George’s Glasgow sweetheart joined him in 1910 and was later to comment on what we today might call culture shock.

“I thought Pierson was so small’, she said, “But every time I went there to shop – and it wasn’t that often – it seemed bigger. In time I made many friends and enjoyed living on the prairie.”

That sums up the prevalent way of looking at the situation, but of course she had sort of missed the interesting part. By then three hundred acres were under cultivation, more and better machinery was purchased, and the herds had increased. More housing was built and several bungalows sat close to the large frame house that George Sr. and Betsy now occupied.

There was a bit of excitement when Canadian Northern Railroad Company projected a railway from Deloraine to Estevan, which would have run along the north edge of 6-4-29. A town named Fulton was planned – and they really would have been on the map, but it wasn’t to be. The rival CPR cut out possible competition when it ran a line from Boissevain through Lauder and Tilston.

Eventually there were twenty children and the new school district of Fulton was formed.

The Fulton brothers farmed together until 1920 when they sold out, ending the seventeen-year partnership. Not a bad run, one would have to call it a success.