The Rescue of the Hathaway Thresher

When Jim Oleksuk was searching though some old farm equipment in his uncle’s yard near Lac Du Bonnet, Manitoba, he almost passed by the old threshing machine rusting away among the horse plows and hay mowers. It was just a threshing machine – they were too common to be valuable and too old to be useful. Best leave it to the metal recycler.

Then he noticed the stenciling on the side that said, “Winnipeg, Canada”. On closer inspection he found the name, “J.B. Hathaway.”

That interested him just enough to ask his uncle about it, and to take the machine home and do some research. 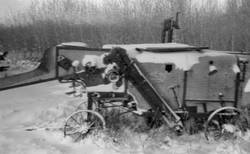 What he learned was that he had found the only remaining example of the Hathaway Turbine Threshing machine, first designed and built in the 1920’s in a farm blacksmith shop in the Deloraine area by J.B. Hathaway.

It was the world’s first rotary thresher, a significant departure from the design then in use and a forerunner of the axial flow system used in modern threshers. It was far ahead of its time. Maybe that was the problem.

Bruce Hathaway came from Ontario with his parents to the Old Deloraine area in 1886 at the age of 10. He and his brother Warren built a blacksmith shop on their farm 15 kilometres northeast of Deloraine.

By all accounts he was a very interesting guy. Dand area farmer, Neil Hathaway, remembers his great uncle as someone who, “walked to the beat of a different drum”. In addition to his inventions he was also a singer and musician with published compositions to his credit.

He patented his thresher in the 1920’s but apparently dumped his first prototype in a lake on Turtle Mountain rather than accept what he considered to be an insulting offer from a major manufacturer.

After cooling down, the volatile Hathaway built another version and set out for Winnipeg to secure investors. Starting at the top, he approached the mayor in the hope that the city would get behind the venture. That failed, and that machine too was discarded, dumped in the Assiniboine River on the way home.

The third one, built perhaps in the early 1930’s, ended up in the hands of a Saskatchewan farmer who later moved to Lac Du Bonnet. There it sat until Mr. Oleksuk stepped in.

And so the third and final version of the Hathway Thresher managed to beat the odds and escape a watery grave. 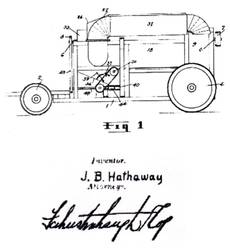 Excerpt from the Patent

No one could have been more surprised than Bruce’s great nephew Neil when Mr. Oleksuk called him and he learned that the third thresher, which was somewhat of a family legend, had survived.

It now resides in the museum collection of the Turtle Mountain Flywheel Club in Killarney, Manitoba.