One of Pierson’s early entrepreneurs 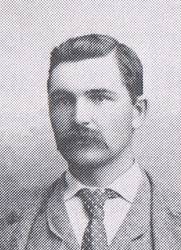 Mr. James Dandy of Pierson MB died at the age of 49.

In the early days of Pierson’s development, Mr James (Jim) F. Dandy was one of the town’s most active entrepreneurs. He launched three very successful businesses in Pierson in addition to owning farmland outside of town. He leaves a legacy tinged with the tragedy that led to his premature death.

Jim Dandy moved to Pierson from Ontario in 1891 with his parents and siblings. In 1897 he built the town’s first hardware store which he personally owned and operated. It was quite small at first, until he enlarged the premises the year after it opened. He added furniture and a lumber yard to the business in addition to providing space for the post office—he himself served as the community’s first postmaster. When the post office moved, the phone office replaced it. In 1910 Dandy sold the hardware store. Since then a string of owners have conducted business out of Dandy’s building, using the space mostly as a hardware store as Dandy did (though it did at one time house an undertaking business and for a brief time a sporting goods store). The building was eventually demolished in the late 1990s due to its poor condition. Today the Heritage Restaurant stands where Dandy’s hardware business used to be.

Dandy’s lumber yard is still in business in Pierson today. In 1899 Dandy’s business was booming and his was said to be “the best lumber yard in southwestern Manitoba” by the newspaper. In 1913 Dandy sold the business to former employees.

Dandy was also responsible for building what the paper described as “one of the best hotels in the West.” In the early 1900s, additional accommodation options were needed in Pierson, despite three boarding houses being in operation already. The new hotel was built on three lots owned by Dandy. It was a two-storey frame structure with a large dining room, reading room, lobby, kitchen and sample room (for traveling salespeople to show their wares) on the main floor. The upper storey boasted 12 rooms, each equipped with a bed, dresser, wash stand and china pitcher, basin and chamber pot.

The hotel was opened in 1901, first as the Annondale Hotel, later renamed the Leland. It became popular among traveling salespeople, doctors, dentists and settlers. The hotel thrived under many different managers. In 1912 the hotel was renovated by Elliott (Scotty) Ross who became owner of the hotel in 1921. In the 1940s the hotel began to be a losing investment and was closed. It was torn down in 1956. The Co-op Cardlock stands on the site today. Dandy married Clara Henderson from the Lyleton district and they had two children. They lived above Jim’s hardware store until their large house was built on Railway Ave in 1901. The house had a full two storeys, plus an attic and basement. This building stood in Pierson until 2011.

Misfortune struck the Dandy family in 1914 when Jim went on an overseas trip heading for Scotland, accompanied by a friend, Chris Halliday. He boarded the major sea vessel the Empress of Ireland (not to be confused with the small steamship Empress of Ireland that was built by Captain Large from Coulter, MB) in Quebec City unaware that he would be part of one of the largest and most tragic maritime disasters in Canadian history. A scant few hours after the ship had left harbour, a massive fog bank emerged, and the Empress was struck by an oncoming coal vessel. The ship took a mere 14 minutes to sink, claiming 1,012 lives with it. Dandy survived by swimming in the icy waters of the St. Lawrence long enough to be rescued, one of only 462 who made it through alive. His companion, Mr Halliday, was not so lucky. Dandy recovered his body and brought it back to Pierson for burial.

Dandy returned to Pierson after this tragic event. He died a year afterwards due to complications that arose from spending too much time in the cold water. He was only 49 years old. Dandy’s wife and children moved to California after his death.