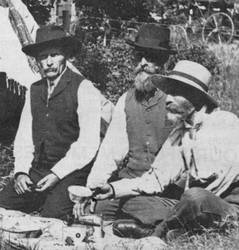 The photo depicts a few Sourisford pioneers enjoying a picnic, and a close look reveals that the one on the left is missing an arm. There has to be a story there.

That man is Walter Thomas whose travelling adventures are recounted elsewhere in this volume. His adventures were far from over.

The early 1880’s were wet years and 1882 is known to this day as the year of the big flood. Settlers on the Commission Trail from Emerson found crossing the Souris River at Sourisford, south of Melita, quite challenging. Thomas, who just happened to live alongside the Boundary Commission crossing of the Souris, built a boat out of scrounged boards and set up a ferry. It was not the most stable of crafts, and no doubt far from graceful, but it got him across the river and he was soon charging up to $5 a trip.

The trip wasn’t without its dangers. The buckboards and other wagons had to be carefully placed and secured. Ponies and other livestock had to swim. But Walter got a lot of settlers to the other side without serious mishap and his business was thriving.

Apparently there were times when he kept his shotgun with him while he was “at work”. You never knew when you might see a duck. One day in May, after a successful crossing, the gun went off as he bent to pick it up, blowing off his hand just above the wrist.

He learned later that it was fortunate that muzzle was close to the arm and the flame from it burned the flesh and arteries so that very little blood escaped. His passengers (Archie McKinnon, Angus and Duncan Bell) who were stopping at the nearby Elliot-Gould Stopping House, took the door off his cabin to use as a stretcher, tied a handkerchief tightly above the wound, and carried him up the bank. Not knowing what else to do they packed the arm in some ice that they were able to find by digging under the straw and manure piled up around the barn. They used whatever other medical tricks that locals could provide, and even found that grated raw potato soothed the wound a bit.

Eight days passed. Signs of gangrene were setting in when good fortune smiled upon Mr. Thomas. In the Dominion Land Office at Old Deloraine, fifty kilometres to the east, a young medical student named Jakeway happened to be getting information about homesteads just at the time news arrived of Walter’s accident. He immediately set out for Sourisford, and arriving there, decided at once that amputation was the only thing to be done. The problem was that he didn’t have the tools for the job. Dave Elliott, a neighbor, rode twelve miles to enlist the help of Joseph Dann, a veterinary surgeon. Dann was able to come along with a good knife and a small, three-inch bone saw. Apparently, as they were his tools, he was the one to operate.

It wouldn’t have been a pretty thing to watch, or to endure. The saw wasn’t adequate to cut directly through the bone so, with Walter’s friends holding the patient steady, he cut around the arm, then snapped it off. To secure the arteries and sew up the wound they had only gill net twine, but it worked. After the operation Thomas had a good meal of stewed wild duck and bannock, and was as good as new – except for the missing arm.

Neither anaesthetics or antiseptics were used.

Walter uttered only one complaint about pain during the operation and that was when Dr. Dann placed the final stitch without, as he had previously done, warning Walter before inserting the needle. When Thomas complained about the lack of warning, Dr. Dann claimed he did it on purpose. He was afraid Walter was about to faint, and thought making him mad would keep him conscious.

Mr. Thomas lived until 1941. Other adventures he and his friends lived through can be found in “Sourisford and Area From 1879”