When the first settlers arrived they had quite a to-do list: build some shelter, break some sod, plant some grain and vegetables.

They were, of course, very busy. When they did have time to take a deep breath and think ahead, they would get together and build a school. 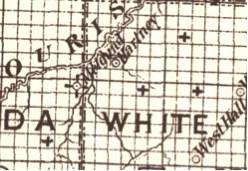 Both Melgund and Hartney appear on this map from 1887. There were no towns as yet – the map shows post office locations. It was the C.P.R. that decided that Hartney would become a town.

One thing they often didn’t do right away was build a town. They might build a church, and then, if the population warranted it, and someone was of an entrepreneurial turn of mind, a general store or a blacksmith shop might open for business.

But most such settlements never did become towns as we know them, with a grid of streets and a main street set for commerce.

Both Melgund and Hartney appear on this map from 1887. There were no towns as yet – the map shows post office locations. It was the C.P.R. that decided that Hartney would become a town.

The name Melgund first appears as a Post Office opened in 1882 in the home of area pioneer W.J. Higgins a few kilometres southwest of Hartney.

Seven students were required for permission to open a school and in 1884 only four school age children could be found. Fortunately William Callendar’s sister-in-law Mrs. M.E. Callendar was planning to come to the region and locals petitioned her to come as soon as possible. It all worked out and Rose School #322 opened on July 11, 1884, one of the first in the area.

It was located just over a kilometer southeast of the Post Office, and doubled as a church for about ten years before the Melgund Methodist Church was built across the road.

The Melgund pioneers may lay claim to being among the first settlers in the area. Sam Long and John Fee, generally considered the founding fathers of the Hartney District, were Melgund folks.

The arrival of the railway to the area in 1890 prompted the creation of commercial centres at Hartney and Lauder. The line passed just over a kilometer north of Melgund, but proximity to Lauder and Hartney meant that Melgund never did evolve into a village with stores and services.

It did however continue to thrive as a community.

The school was re-built in 1903 and was given the Melgund name as well. It operated until 1962.

Here the Melgund students carry the colours for their home school in the Hartney Field Day Parade.

A beef ring was active beginning in about 1914. A “flag station” called Emblem was established on the nearby C.P.R. line.

Here the Melgund students carry the colours for their home school in the Hartney Field Day Parade.
The church continued to serve the community until 1967. A one-sheet curling rink was established in 1947, a sure sign that the locals still preferred to support the local alternatives for recreation and entertainment. But time marched on.

Today should you travel west on Melgund Road, south of Hartney off of Highway 21, you will come to a carefully tended small cemetery at a crossroads. Established in 1887, before the town of Hartney and Lauder were created, it was the first graveyard in the region. Although it sat unused from 1900 until 2002, it has been refurbished. Across the road, a cairn helps to mark the spot that was home for so many people over so many years.