In 1981 Earle Currie, in a written submission for Beckoning Hills Revisited, recalled the day the famous American politician and orator stopped in Boissevain.

“One time, Mr. William Jennings Bryan, a noted politician in U.S.A. was trying for the presidency. He came to Canada on the Great Northern Railway. He was to speak at the station from the back of the platform of the train at 9:30 a.m. The high school pupils wanted to hear him speak, so we ditched our books under the front steps of the school and without permission went to the station. The teacher then had to let the rest of the pupils go to hear him speak.”

I found it very interesting that a high school student would cut class to attend a speech, and that he would be impressed enough to recall it so many years later.

I also had some questions.

Just when did this happen? Bryan ran for national office three times, in 1896, 1900 and 1908. He also travelled widely between those attempts as a lecturer. Between 1904 and 1906, he was a regular on the Chautauqua circuit across the continent.

I wasn’t able to find any other mention of his visit. Did no one else share Earle’s enthusiasm for the event? Should I start questioning the accuracy of his memory?

Quite by accident, while on another mission, I found a photo in the Boissevain Archives that confirms Mr. Currie’s story. It is a photo of William Jennings Bryan standing at the back of a train car which is parked in front of a train station. He is clearly addressing a large crowd. Maybe Earle is in there somewhere.

The inscription on the photo clearly states, “Wm. Jennings Bryan in Boissevain May 7, 1900”. The station matches what we know about the old Brandon, Saskatchewan and Hudson’s Bay Railway station. 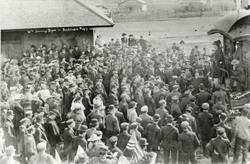 The problem is that the BS&HB Railway wasn’t built until 1906. The date, or the location, had to be wrong. It wasn’t the location – a quick look at a photo of the CPR Station resolved that issue.

Was this perhaps not a campaign stop?

The solution was, in the end, not that hard to find.

A search through the digitized Brandon Sun revealed that Mr. Bryan appeared at a widely advertised and well-documented speaking engagement Brandon on May 6, 1909. He had appeared in Winnipeg a few days earlier. It’s more than likely that he was on his way to Boissevain (and home) the next day.

And as to Earle’s recollection that it was about Mr. Bryan, “trying for the presidency”, the never-ending campaign trail was likely as prevalent then as it is now. 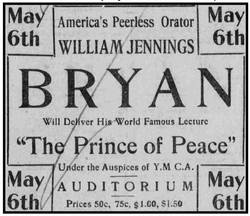 A Brandon Sun ad for Mr. Bryan’s presentation in Brandon – the day before his Boissevain stop.

A Brandon Sun ad for Mr. Bryan’s presentation in Brandon – the day before his Boissevain stop.