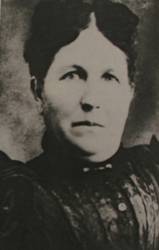 Warren Hathaway came west to start a new life, and after establishing himself in the pioneer settlement of Old Deloraine, he sent for his wife and children. That was in 1882. The Hathaway story then took an unexpected turn, or two.

About two years after she arrived, Warren contracted pneumonia after rescuing someone from a pond. It proved fatal.

At that point one might have expected Mary to reject this new land and return to Arthur, Ontario where she had family. Instead, she called her children together and affirmed that their father had his heart set on a homestead. He had already selected the location. They were going to press on.

Mary’s brother-in-law, Reverend Davies, drove her to the Land Titles Office where a long lineup stood waiting for opening time. Everyone knew her story. The line parted to let the young widow through and she fulfilled one of her husband’s dreams by filing on a quarter section on 28-4-22. It is worth noting that in those times, in fact throughout the entire homestead era in Canada, the only women allowed to obtain homestead land were widows with minor children.

Later she was driven to her new homestead where she found that neighbours had gathered to break some land and welcome her. That day, eleven teams of oxen and an equal or greater number of neighbours, broke 22 acres of land. A few days later a bee was held to erect a small house and Mary settled down as a homesteader.

Acts of kindness were many, some of them unexpected. Outstanding accounts owed to the husband were sometimes repaid unsolicited.

Particularly poignant is the story of how Mrs. Sheppard, an elderly neighbor, dropped by at a moment when Mary sorely needed emotional support and encouragement. Just as we can only imagine how it felt to face the hardships of pioneer life, so too must we leave it to imagination to sense how these acts of kindness must have allowed many to carry on.

Mary decided to raise sheep, which the children could care for, leaving her free to prepare the wool and to knit items for sale locally. Mitts sold for fifty cents a pair. Thus they settled in to life on a prairie farm.

While Mary’s neighbours were putting the finishing touches on a sod barn, a contingent of North West Mounted Police arrived. After placing a flag on the still-unsettled roof, they claimed the building, in the name of the Queen, as a halfway house for remounts. It seems that Mary’s farm was located on a patrol route. During the summer of 1884 a considerable detachment of North West Mounted Police had been stationed at Wakopa to guard against cross-border horse thieves. In the spring of 1885 the armed resistance of the Metis, in what is now northern Saskatchewan, added to the border security concerns. 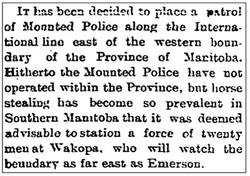 Officers dropped by unannounced at any time of the night or day, sometimes even accompanied by prisoners. Many great names of the force, including Inspector Pennyfather and Constables Knight, Steel, Doyle and McGuire, rested at Mary Hathaway’s.

How did this affect the family? Was it unsettling? Inconvenient? Profitable?

In any case, the family persisted, and in some ways beat the odds. When Mary passed away in 1924 she was one of only a few persons holding an original patent deed for her homestead. Her family continued farming the property and some of them reside in the region to this day.

Sam Steel was one of the first officers to sign up for the newly-formed North West Mounted Police force. His career took him on their first epic march west in 1874, to the Riel Uprising in 1885, to the Klondike in 1898, and beyond. Descendants of Mary Hathaway recalled that he was one of the officers who made use of their barn.

This resulted in inequities like those documented by Miss Binnie-Clark who paid $5,000 to buy her own farm in what is now western Saskatchewan, a huge sum when compared with the $10 that men were paying the government for a 160-acre plot of land.

Miss Binnie-Clark initiated the "homesteads for women" movement, which reached its height between 1908 and 1911.Thanks to the efforts of Miss Binnie-Clark and other women, the matter was raised in the House of Commons in 1910 but without success. Many believed if single women were allowed to homestead, more families with daughters would settle in the Canadian West. Men supported Miss Binnie-Clark's cause as well. A 1913 petition was signed by 11,000 male electors, but was also ignored. By the time women were able to vote the era was over and other battles were being waged.