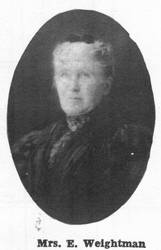 Mrs. Weightman, a widow from Berwickshire, in northern England, and her children, arrived at their homestead in the spring of 1882 after a fifty-six day journey from Edinburgh, Scotland. Their trip followed a well-established route. First came the ocean passage on a crowded ship, then the trip overland to Lake Huron, by steamer from there to Duluth, and by rail from there to Brandon. At Brandon they bought the usual homestead supplies: oxen, a wagon, a plow, a tin stove, a tent and two cows.

The eldest daughter Mary, stayed at Brandon where she became the second teacher in that booming city. The rest of the family decided to search for land and headed south of Brandon with a few other newcomers. On the second day out, news reached the party about land recently opened for homesteading, so a delegation sped ahead on a horse-drawn Democrat towards the Land Titles Office at Old Deloraine. The rest continued with the oxen and supplies. From there on, high creeks and wet ground slowed them down – on a particularly bad day they made just five kilomterers.

The reward came when the group returned from the Land Titles Office with the papers entitling them each to a homestead. Celebration ensued and two long days later the Weighman’s found their plot of land. They were home.

As quickly as possible the Weightmans broke some land and planted a few acres of oats and some potatoes. A sod barn was erected and a modest frame house was built – not quite finished for the coming of the first blizzard, but quite an improvement over the tents that had provided their only shelter up until this point.

The land that had seemed empty was rapidly filling up. Mrs. Weightman decided to operate a stopping house which soon became very busy. Eighteen-year old Will made weekly trips to Brandon for supplies and to the Turtle Mountain for wood, while John looked after the chores at home. The next logical addition was a Post Office which Mrs. Weightman provided in her home as of 1883. It was called West Hall in memory of the Weightman farm home in England. In additon to those duties, Mrs. Weightman found time to act as mother to several of the local bachelors, to care for them when they were sick, and to act as midwife for the district. The family enterprises filled a very real need in the region.

The neighbourhood came alive with new settlers. A site was chosen on the Weightman property for a school to be named West Hall. A community developed.

Today, a traveler on a quiet gravel road a few kilometres east of Highway 21, in the Dand region, might be tempted to stop at the West Hall School Cairn. I did just that one fine fall day, and I noticed some buildings to the south. Trees still outline the farmyard the Weightmans established that autumn over 130 years ago, but the large houses that replaced the “limited accommodations” of 1883, has been vacant for some time. 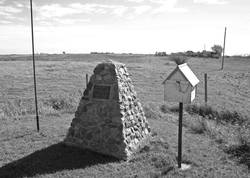 The West Hall School Cairn, with the Weightman farm site in the background.

The traveler might wonder, as I did, what story that farmyard has to tell.

That would be the story of the Weightman family. But it’s a story with some missing pieces. Like all good stories, it leaves us with questions. If only we could ask her.

A Letter to Mrs. Weightman

You clearly have an adventurer’s spirit and seem to be an impressive manager. But what were you thinking - leaving the United Kingdom with children in tow to settle in what was a hinterland?

Your descendants have left us a great story in the local history but it’s as if your life started when you came to Manitoba, and that certainly isn’t so. What, we wonder, was your back story?

It is hard to know, and little was written about women or children. What we know for certain is that at the time both Scotland and the prairies of Canada were part of the same empire, and that the British Empire was at its height and at its hungriest. Some were very rich, many were very poor. In your day the British Empire decision- makers were men – rich British men. Your Queen Victoria had significant power – at least at the beginning of her reign in the early 1800s - but no other woman could even vote at that time – in England or in Canada. Your arrival as a single mother seems unlikely and most curious.

What clues do we have to your story in England?

We know that you had set out with about 500 pounds, which was like having $60000 today. That would have been plenty for the travel costs and the supplies we know you bought in Brandon to get set up. But after purchasing your farm equipment, animals, tools and building materials it wouldn’t last very long. You weren’t a pauper – which explains the china you brought - but neither were you wealthy. You may have needed to make some money in a hurry or your savings could easily have been used up quickly.

We can’t find anything about your husband, what he did or how he died. You were a woman living in northern England. At the time of your departure small scale subsistence agriculture had been discouraged for decades in favour of large scale sheep farming. Great numbers of rural men and women with large families moved into the cities in search of work. That might give us a clue to your story.

As a widow you would have had little security. You could find a low-paying job, start a small and poorly paying needlework business, remarry or rely on your children to support you. Often men in your time stipulated that if their widowed wives remarried, they could not take the family wealth into the new marriage. If your children were many and young, your options were limited. A mother with as strong a will as you seem to have had might be inclined to find greener pastures.

As hard as it is for us to imagine, children in your day were in high demand as industrial workers. Poorer families gave their children up as early as six years old to industrialists. The law stated that each child could only work ten hours per day and needed to be given at least two hours of schooling a week. But there were apparently only four inspectors for all of Scotland at the time. Quite possibly your protective instincts were awakened to the possibility of a new life in a far-away land – a life that might appeal to the adventurous spirits you seem to have nurtured in your children.

Perhaps you saw one of the ‘Make a New Life on Free Land in Canada’ ads that were being scattered about the UK. But how much did you really know? There were a lot of exaggerated reports about the wonders of life in this new land as governments tried to attract settlers.

In any case you came, and by all accounts you prospered.

Thank-you for leaving a bit of your story. We’re pleased you learned to live here and hope you grew to love this place as we know your descendents do.

This resulted in inequities like those documented by Miss Binnie-Clark who paid $5,000 to buy her own farm in what is now western Saskatchewan, a huge sum when compared with the $10 that men were paying the government for a 160-acre plot of land.

Miss Binnie-Clark initiated the "homesteads for women" movement, which reached its height between 1908 and 1911.Thanks to the efforts of Miss Binnie-Clark and other women, the matter was raised in the House of Commons in 1910 but without success. Many believed if single women were allowed to homestead, more families with daughters would settle in the Canadian West. Men supported Miss Binnie-Clark's cause as well. A 1913 petition was signed by 11,000 male electors, but was also ignored. By the time women were able to vote the era was over and other battles were being waged.