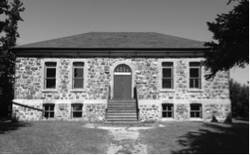 The first school in the Napinka area was started in 1894 in a farmhouse about one mile east of the current town. The first teacher was Ida Crowell, who also would teach some of the local farmers in the winter.

The two-storey fieldstone building that still stands on the north side of Napinka was completed in 1901, and is one of the most unique schools built in Manitoba. The stone that went into building the school was hauled from south of the current Highway 3. In a time before modern tools and tractors this would have been a huge undertaking considering the size of some of the stones. There are two rooms upstairs where most classes were taught, along with a library, a furnace room and a second room in the basement that was used as a gym for many years.

In the 1950s, the problems of rural depopulation lead to declining enrolment. Many of the small one-room schoolhouses in Manitoba were closed and the students were sent to towns such as Napinka. But the old stone school, which was built without indoor plumbing, wasn’t large enough for all the new students. A new wing was built on the north side of the building, with three new classrooms, indoor toilets, a chemistry lab, staff room and a new library.

In 1968, the Manitoba Department of Education established the Unitary System whereby high schools were consolidated across the province. Napinka, despite the new addition, had fewer and fewer students. Farms were larger and families smaller. People were leaving the smaller towns for larger centres which offered more jobs and services.

However in 1975 consolidation struck again, and this time Napinka School was closed. All students were sent to Melita, and the building was shut down. Soon after, some local residents got together and turned the addition into a community Drop-In-Centre. Every morning, coffee is offered while the rest of the addition is available for family or community events. One classroom has been turned into a banquet room, and another has two pool tables for tournaments and friendly games. The original library in the newer section is still being used today. In 1993 the original stone part of the school was designated a Municipal Heritage Site by the R.M. of Brenda. 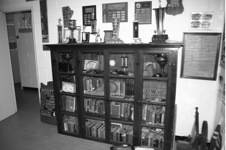 The museum display in the Napinka School addition.

Today the staff room has been turned into a miniature museum, full of photos, books and memorabilia from the history of the Village of Napinka. Family reunions, pot-lucks and other events are still held at the center. The stone building itself, despite being almost 120 years old, is still standing strong, and the community is looking into how they can preserve it.