There are so many stories about Sitting Eagle that one might suspect that there were two Sitting Eagles, or perhaps three.

There is the Sitting Eagle from the Moose Mountain Band who told stories of witnessing the Battle at Little Bighorn in 1876. He acted as a guide and friend to the NWMP and a friend to notable missionary Father Lacombe. He lived by trapping and selling handicrafts and by all accounts was well-respected in the region. Evidence indicates that he is not the Sitting Eagle Doug Snyder of Melita remembers from his childhood, although some of his activities seem to have been mistakenly credited to “our” Sitting Eagle.

There is the Sitting Eagle who was the Grandson H'damani, the Chief who had led the small band of Dakota Santee into the region in 1862. He remained on IR#60 after the government bought out the rest of his band and re-settled them at the Oak Lake Reserve. He too lived by trapping and selling handicrafts and by all accounts was well respected in that region.

Then there is the Sitting Eagle who was referred to as a Chief of the Pipestone Band who spent a lot of time in the Sourisford area, was a close friend of pioneer Dave Elliott. He too lived by trapping and selling handicrafts and is remembered kindly by several locals who retain childhood memories of his many visits.

It was a common name, and one suspects that the stories became intertwined. It is possible that there was a Sitting Eagle based in Pipestone and one based in on Turtle Mountain. But the evidence is that these two were one in the same. 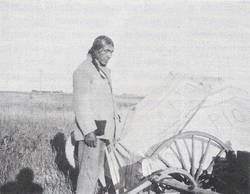 Sitting Eagle At Deloraine in 1924

While many accounts from the Melita / Sourisford area see him as a Pipestone Chief, those from the Deloraine area emphasize his roots on Turtle Mountain.

Gordon Elliott, who knew him well, and in fact taught him to read using an old “Sweat Pea” Reader, recalled that he was with the Pipestone Band. 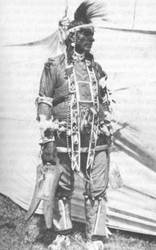 The Sitting Eagle at the Melita Fairground.

The Sitting Eagle pictured here at an event at the Melita Fairgrounds, was a Sioux hunter and trapper from Turtle Mountain who spent considerable time in the Sourisford area where he also maintained a small lean-to dwelling. He was a regular visitor, a familiar and welcome figure to many farm families in the region.

His story begins in the 1890’s when the government set out to close IR#60 in the Turtle Mountains. He and his Grandfather H'damani were among the few who declined a $200 government pay-off to relocate to a reserve near Pipestone. By 1909, only H’damani, his grandson Chaske (later known as Sitting Eagle) and a few others remained.

Many residents of The Deloraine and Melita areas recall his habit of dropping in at mealtimes, sharing stories, making the children bows and arrows. He would exchange meat and fish for whatever the homemaker hand on hand, and accept a spot in the hayloft for the night. He could be spotted at the train station shipping furs. He attended fairs and celebrations, in full traditional attire, and sold his hand-crafted baskets and other items.

At some point he did relocate to the Canupawakpa reserve, but during the final decades of his life he seems to have mainly lived in a small log cabin on IR #60 trapping, hunting and travelling the area. Joseph Sandy, a grandson of Sitting Eagle’s brother, remembers him journeying from Canupawakpa to Turtle Mountain.

Sitting Eagle died alone in his log shack in April of 1944 and is buried in an unmarked grave in the Deloraine Cemetery.

Perhaps the way to get the most accurate portrayal of Sitting Eagle is through the memories recorded in a series of interviews and writings involving some of the many people who knew him. Although their memories provide some conflicting information, a picture of the man does emerge.

“ In fact he used to come over to our place, oh for about May-June on and stay there overnight, but he’d never stay in the house. He’d sleep in the loft where the hay was. I remember him when we used to come to Deloraine Fair. He used to help park cars sometimes.” “He’d always pat you or pat you on the shoulder or something like that. No, I was never scared of him.“

John Louttit a resident of the Sourisford area. (1920’s) Interviewed by Neil Hathaway on January 25, 2008

He was a real harmless old gentleman. He made us these bow and arrows, boy they were something else. He made them out of willows and they have a little knob on the end of the arrow, on the firing end. Then he taught us how to make these other guns out of three laths. Once he found out he could sleep in the hayloft, dad told him you just leave your matches out here, he never forgot, he’d take them out ..had a little tin box.
He trapped mostly. Never even had a gun. He might have had one in his camp, but never travelled with it.
He didn’t just come to eat. He talked about lots of things, like his ancestors and never did mention family.

His second wife, I often saw her. They didn’t get along too well. She finally left him and went home. I spent hours teaching him out of the Old Sweet Pea reader.

… I knew Sitting Eagle for many years. I respected him. He was a very nice person; quiet. Very lonely. We always felt he was very lonely. I came back to teach at Bayview School. … he came into the school … He never caused any trouble and he really enjoyed the students, especially the smaller ones.
I never heard anyone saying anything against Sitting Eagle. They would give him rides and do whatever they could for him. I think that everyone respected Sitting Eagle. He told us at the school one day that his wife died with the “big spit” which, of course, was tuberculosis ….. many years before he came to live in the Turtle Mountain.

At that time, the League of Nations was the big international movement for peace among nations. Eagle was full of questions about the proposed “Lucerne Treaty” and wanted my opinion of its possibilities. Eagle certainly had no radio or power to run one. He did not get and could not read newspapers but he knew more about it than I did.

One night he brought me a chicken and asked me if I would cook it for him. He said the Indians believed that for every new baby that’s born, that is the spirit of a person who has died. The spirit comes back in the form of a new baby.

Mrs. J. B. Arnold, Sr. (An excerpt from The Deloraine Times and Waskada News Special Edition for Deloraine’s 75th Anniversary)

Charlie Chaske, grandson of Hadaminee, stayed for a few days in 1922 and 1923. He wore pince-nez eyeglasses, we called them “nose pinchers” and was a well-mannered young man,…

… he showed Jim, my husband, and myself, his parent’s marriage certificate. His father, called “Making Love,” and his mother “Caught in the Wind,” were married at Cardston, Alta., in 1873, by a priest of the Latter Day Saints, or Mormons, as they are also called.

The reports are consistent in that Sitting Eagle was a loner who walked his own path, a man known and respected for whom he was. There is a fondness in the recollections.

Questions remain. Was his solitude of his own making or was it a sort of exile? Rumours in his day suggested that there was some sort of falling out with his community at Canawakupa but the impression one gets is of a man who made his own choices.