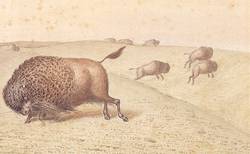 Bison, once numerous on the prairies surrounding Turtle Mountain, are now all but extinct. CREDIT: Culture, Heritage, Tourism and Sport.

Indigenous peoples inhabiting the post glacial plains of North America depended largely upon the coming and going of bison herds. When it came to killing the large animals, the hunters often used the landscape and natural surroundings to their advantage. A well-known strategy was to stampede bison over a cliff or riverbank, causing the animals to break limbs in the fall which made them easier to approach and kill.

On the northeastern slopes of Turtle Mountain, another aspect of the land was discovered that was used advantageously to trap and kill bison. In one place, a stream that forms part of the headwaters of the Pembina River fans out into a sizable swamp surrounded by big trees with water that flows all year round. First Nations discovered that they could stampede bison into this swamp, where the bulky animals would become bogged down and immobile.

This swamp has come to be known as Skull Swamp because of the numerous bison skulls found strewn about in the water. All of the skulls had been split open. It is believed that this is because the brains of the bison were removed and used during the tanning of the hide. Several stone knives have been found lying on the bank of the marsh, leading to the probability that the animals were processed right there beside the swamp. Even today the banks are at least a foot deep with old bison bones.

In the 1880s, the section of land that the swamp is on was settled by Mr. Frank Kingdom from England, and the swamp was discovered to be a good place to corner and shoot bison. By that time, though, there were very few still wandering the plains.

Once the European economies of fur trading and agriculture became dominant in the area the bison disappeared. By the 1860s, the thundering herds that were once so common on the prairies had all but vanished and only the odd wandering beast was spotted into the early 1880s. After this the traditional way of life for First Nations changed completely, and they had to look to other activities for their survival.