One of the densest concentrations of archaeological sites in Manitoba exists just south of Melita, along the banks of the Souris River. Ancient villages, campsites, vision quest circles, and burial mounds date back over 10,000 years—to a time immediately following the retreat of the glaciers.

Helping make up this archaeological density is the Devil’s Lake-Sourisford Burial (DL-SB) Complex, which is made up of hundreds of burial mounds scattered from southeast North Dakota to south-central Saskatchewan. The greatest concentration of this burial complex in Canada is located near Sourisford.

Out of this vast area, only one group of burial mounds have escaped cultivation. The Sourisford Linear Burial Mounds remain as one of the best preserved examples of mounds in all of Canada—so much so, they were designated a National Historic Site of Canada. The site is accessible to the public and protected by Parks Canada.

In the early part of the century, pioneer settlers and vocational archaeologists began excavating the mounds, searching for an explanation behind the people who built them and where they came from. Dr. Leigh Syms from the Manitoba Museum in Winnipeg and an active archaeologist in the area pieced together a theory about their origin.

The people who left these mounds and others in the DL-SB Complex are known only as the Mound Builders. They are thought to be related through common ancestry to—or influenced by contact with—the Mississippian peoples who lived along the mid and lower reaches of the Mississippi River. The idea of burial mounds spread from these Mississippian people, who in turn drew their influences from Central American civilizations even farther south. 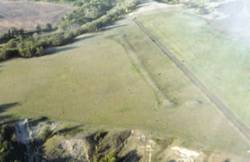 The Mound Builders were a nomadic bison hunting society who moved about according to a seasonal cycle, summering on the plains. The Mound Builders existed following the retreat of glaciers from the last ice age, about 10,000 years ago. The burial mounds at Sourisford date back to 800 AD, over 1,000 years ago. These cultures buried members of their band who did not make it through the winter, mainly infants and the elderly. They laid the bodies of the dead into the earth about 18 inches down, curled into fetal positions and facing outwards. The bodies were then covered with poles and sod before being topped by an almost impermeable layer of clay. The mounds in the DL-SB Complex vary in size and shape from single mounds to the long, linear mounds such as those at this site.

The ground was often much too hard with frost to allow any burials to take place until the ground thawed, which coincided with the spring migration of bison. The mounds at Sourisford are placed on level prairie at the edge of a valley carved by the Antler River. It is thought that this site was used during bison stampedes, as the animals were chased towards and over the steep river valley. The animals broke limbs in the tumble down the valley, making them easier to approach and kill. There is some speculation that the mounds may have served as fortifications or sacrificial altars as well as burial tombs.

Trade Networks and Re-sanctifying the Mounds

Artifacts unearthed from these mounds and others in the area attest to the sophisticated, continent-wide trade networks the Mound Builders were part of. Around one skull was a crown of hammered copper from the Lake Superior region. A shell that originated from the warm waters off the coast of Florida was found in the mounds, carved in the shape of a Thunderbird. These artifacts are a few among many which demonstrate the trade relations that early cultures of the continent developed. Materials were transported thousands of kilometres without the benefit of the horse or the wheel.

Many of the artifacts that have been found in the Sourisford Linear Mounds have been taken away to research labs and museums in Winnipeg and places farther east. Currently, an effort is being made to reclaim the original artifacts, have plaster casts made of them and the originals returned to the mounds. Negotiations are also under way to protect those parts of the mound that are not yet protected by Parks Canada.