On the Heaslip Trail

In the early 1880’s the main road from Old Deloraine to Brandon was the Heaslip Trail named for Sam Heaslip who established the trail and used it to deliver the mail.

Heaslip (pronounced hays-lip) came from Ontario in 1881 and homesteaded near where Minto would later be located. Mrs Heaslip was the first woman of European heritage in the district that soon bore their name.

In 1882 Sam received a contract for mail delivery. Each week he picked up the mail in Brandon, using a Democrat in summer and a sleigh in winter. He crossed the Souris at Sheppard's Ferry operated by Jack Sheppard and located about a kilometer east of the present Highway #10 bridge. The next stop would be the Heaslip home, the site of a post office named after them. The home also served as a stopping house and store.

Sheppardvillle, a hopeful potential village owned by Robert Sheppard was the next stop. From there it was on to Nimitaw where Mr. James Rae was Postmaster. Waubeesh, the main settlement in what would become the RM of Morton would be the next stop – a busy one at that.

Heaslip’s route ended at Old Deloraine where mail for more far-flung locales was picked up by others. Some called the service a stagecoach, which probably meant Sam didn’t mind taking along a passenger or two.

Heaslip, from the south.

The Heaslips were well known for their hospitality.

R.F. Chapman of the Boissevain area remembered stopping overnight at Sam Heaslip’s on his first journey to his new home. Mr. Heaslip helped guide him to his homestead and gave him some firewood to get him started. Later he would stay there while taking a load of wheat to Brandon. 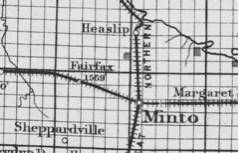 This map from 1915 show's Heaslip's "new" location on the Great Northern Line.

School classes and Presbyterian services were sometimes held in the upper floor of a granary on their farm until Riverside School was built nearby. Sam served as a Reeve for several years, and was mentioned in the 1901 Canada Department of Agriculture promotional publication as “one of the prominent men, an old settler and successful farmer.“

In 1898 when the Canadian Northern Railway established the town of Minto, existing post offices, and the beginnings of villages that had grown up around them, were eclipsed by the new town. Heaslip, however, got a bit of a reprieve when the Great Northern began operations in 1906 and the name was used for the village, which consisted of a station, general store, a McCabe Elevator and two residences. Later it even had a garage and Case Implement Dealership.

But the railway era was to be short-lived. Soon the bridge we now call the Old Riverside Bridge was built, changing the road transportation patterns substantially. In a few short decades we saw the Heaslip Trail supplanted by the Great Northern, and then by successive versions of Highway 10. Should you find yourself on that highway, take note of the first grid road south of the beautiful Souris Valley. Look westward at the open prairie as you pass. That’s where Heaslip (the second one) used to be. It was just one village too many on a busy highway.