Oh to be a young single person, setting out to make one’s way in the world, back in those carefree settlement times.

Suppose you had just moved to the bustling new town of Hartney. The town’s busy main streets were lined with well-stocked retail stores and assorted services that far surpassed the basic necessities. There were jewelry stores and photography shops, banks and dressmakers. It was very cosmopolitan.

Suppose you had just landed a job at Fry’s Men’s Wear, or perhaps at Woodhull’s Drug Store? You’d need accommodation and what you would be looking for would be a place like Tena Hopkins’ Boarding House.

Today’s singles of course would settle for an apartment, where modern conveniences such as microwave ovens, refrigerators and vacuum cleaners allow even the domestically challenged to fend for themselves. But in those days it just wasn’t efficient to live alone. Bachelors might well have no idea how to cook and do laundry. Single ladies would have the skills, but in those days before affordable labour-saving devices it just made more sense to have those services provided.

That’s why boarding or rooming houses were an essential service in small towns. And what a service!

Consider the lifestyle and compare it to the hectic life of today’s singles. 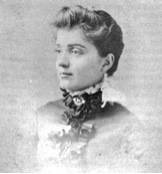 Before setting off to work one would be served a real breakfast. There was no Tim Horton’s to provide one on the way to work, but do we really see that as an improvement? After a hard day’s work the guests came “home” to an evening meal served at the dinning table. While it is true that busy singles today have the option of picking up burgers and fries at a drive-through, or popping some frozen concoction into a microwave, does that really seem like progress?

In today’s world how many people come home from work only to face another round of domestic chores? Not at Tena’s. True there was less personal freedom – you might even have to share a room – but in a way the whole house was yours!

Miss Hopkins does indeed serve as a model for the independent woman in days gone by. The daughter of homesteaders, Tena was seventeen when her family left Ontario. In 1889 she began her career in conventional fashion by serving as housekeeper to her businessman brother, William, who had just built a three-story brick building in the new town of Hartney. She was probably not the first young woman who decided that there was more money (and perhaps more personal satisfaction and independence) in looking after paying customers.

When the spacious house, still standing on Spencer Street, became available, she and her mother opened the boarding house that soon became somewhat of an institution in Hartney. 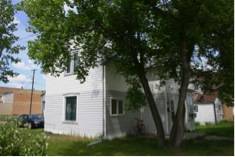 Tena was reputed to be a fine cook and provided meals not only for her guests but to others as well – the table would seat fifteen. After the evening meal one could retire to one’s room, which was kept neat and clean by the housekeeping staff, or use the tennis courts on the lawn south of the house. Tena herself might join in demonstrating her “better than average” skill at the game.

Her boarders were like family and referred to themselves as “Hopkinites”. Romances occurred and marriages resulted. Many kept in touch for years afterwards. Throughout its forty year history the modest house was ”a home away from home for the school teachers, bank clerks and single business people.”