Refugees from the United States

In 1862, Chief H'damani led his Dakota Santee band into Manitoba, fleeing from conflict with the U.S. Army to the south. H’damani claimed to have bought the land referred to as “Turtle Mountain” from the Ojibway. He sent a request to the lieutenant governor of Manitoba for his claim to be officially recognized. 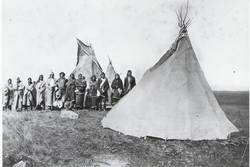 The Formation of IR60

Lieutenant Governor Morris was not thrilled about giving land to H’damani’s group so near to the restless American border. Although the Dakota considered themselves to be residents and protectors of the entire North American Great Plains, the British did not recognize them as such or include them in any treaty with the Queen. But H’damani was determined to provide for his people. In personal meetings with Morris, he explained that his people were struggling for survival as the bison herds dwindled. In addition to a piece of land, he asked for seed to plant, implements to help work the land, and some cattle. H'damani refused to move to the Oak Lake Reserve when it opened in 1877, so the government finally gave in and the Turtle Mountain Reserve was established in that same year. It became the smallest reserve in Canada, measuring only one square mile.

Living on the Reserve

The land’s proximity to Turtle Mountain offered H’damani’s band prime hunting and fishing opportunities. By 1884, they had succeeded in breaking 35 acres of land for farming using only one yoke of oxen. In that year the only outside assistance they received was a little seed and three bags of flour from the Canadian government.

There are mixed accounts of how European settlers moving into the area regarded H'damani and his band. Local histories include comments such as: “The chief was a wise and good man, highly respected by all who knew him”. Other settlers were apparently unhappy. A group got together and wrote their grievances in a petition, complaining that the Dakota were hindering their access to timber, and in some cases threatening the settlers if they continued to go into the woods. Certainly not everyone opposed the presence of the reserve and many settlers got along quite well with their Dakota neighbours.

The Government Abolishes the Reserve

In the 1890s, the government endeavoured to move H’damani's band to the Oak Lake Reserve. Slowly, families did decide to relocate, some encouraged by a $200 government pay-off. By 1909, only H’damani, his grandson Chaske (later known as Sitting Eagle) and a few others remained. The government then ignored H’damani’s authority and convinced the remaining families to sign a release for the reserve, and the land was eventually sold by public auction in 1911. The reserve officially ceased to exist on November 21st, 1913, and H’damani and his remaining family were paid a small token—nowhere near the amount that the land was worth—and instructed to remove themselves. H'damani's grandson, Sitting Eagle, lived out the last dozen years of his life in a small log cabin in the northwest corner of the former reserve. He died there alone in April of 1944 and is buried in an unmarked grave in the Deloraine Cemetery.