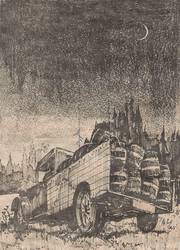 Rum-running expeditions usually occurred in the dead of night, when the moon was the only witness . . . CREDIT: Boissevain and Morton Archives. Artist: Jan Kamienski

In the early 1900s, both Canada and the United States prohibited the sale of alcohol. In 1924, Canada was the first of the two to allow government controlled liquor sales, but the American prohibition lasted until 1933. Liquor became a hot commodity on the black market, and some of those living near the Canada-American border took full advantage of the situation.

The Adventure of Rum-Running!

One rum-runner of the time was Walter Zeiler. It was legal in Canada for one individual to purchase 12 bottles of rum a week. So, every week Zeiler would legally buy 12 bottles of rum under his own name, and then 12 bottles under the name of his younger brother, so that he would have 24 bottles to sell across the border. He slung the bottles of rum on either side of his horse's saddle and wrapped them in straw to keep them from breaking.

He travelled in the dead of night, never under a full moon, and never after it had freshly snowed because of the tracks that would be left by his horse's hooves. Riding the 10 miles between his father's farm and the border, he stayed off the roads, charging straight through the bush of Turtle Mountain which he knew like the back of his hand. Walter's father, Robert Zeiler, had a piece of land on the North Dakota side of where the International Peace Garden is now located. The Dunseith Trail, used by many bootleggers in the area, ran from this property to the Zeiler homestead 10 miles (16kms) north in Canada.

A man from Minot would come up to meet Zeiler and hand him a wad of $600 in cash every week – an astronomical sum in those days. Zeiler knew that he was taking a big chance if he ever got caught, but he loved the thrill and excitement of the adventure. He also had great faith in the swiftness of his bronco, King. He had bought the horse for only $12 due to its wild and mean personality – the horse had almost killed two people – but Zeiler, a little wild-spirited himself, tamed the horse and the two became close friends. Once, when jumping over the border fence, King's back legs got caught and made enough noise to attract the attention of the American border patrol. A huge spotlight was fixed on them and the officers gave chase, but Zeiler and his bronco “ran like hell” and got away.

A Lucrative, Though Temporary Business

Twenty-five years old and still living on his parents' farm, Zeiler remained a mystery. No one could figure out where he got his money. One day he went into Brandon and bought a full suit and a $2,000 New Ambassador sedan. This was in the “Dirty Thirties” when such wealth was not commonly come across. Not even the RCMP officer who patrolled the road past the Zeiler farm to the border – and took his meals three times a day with the Zeiler family – caught on to Walter Zeiler's weekly forays.

Zeiler ran rum through the concealing bush of Turtle Mountain throughout 1932 but stopped once the snow began to fall. In the spring of '33 he was ready to start up again, but by that time the United States lifted the liquor prohibition and alcohol from north of the border was no longer in demand in large quantities south of the line. So, Zeiler's lucrative but risky business came to an end.