Visitors to the Waskada Museum will be familiar with the Amos Blacksmith Shop, a Designated Heritage Site. It was built in 1927, but its roots go back to the earliest days of the village. 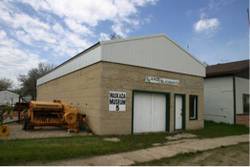 The Amos Blacksmith shop - part of the Waskada Museum.

Mr. John Renwick (Ren) Amos came to the region in the fall of 1895. After spending the threshing season working with his brother Johnson, he picked up winter work at Kenner’s Blacksmith Shop, then at Ben Steele’s shop, in Deloraine

In 1897 he and his family received a homestead in the Mimosa District near where Waskada would be located. He immediately set up his own blacksmith shop on their farm.

The turn of the century was a time of transition in agriculture. The power supplied by the horse and oxen would soon give way to steam, and later, to gasoline engines. These new sources of power accelerated the already increasing reliance on machinery in general.

The role of the harness-maker, so important in the earlier settlement era, gave way to an increased need for a blacksmith. It was an occupation that spanned the two eras as the duties, which had been mainly about shoeing horses and sharpening plow shares, expanded as the farmers adopted new tools. These implements could be ordered from far away, but repairs had to be done closer to home. There were no parts departments, stocked with anything a farmer might need. When something broke, it had to be fixed, the sooner the better. Mr. Amos’s skills were in demand. He never did prove his homestead claim. He was just too busy.

In 1899 it was confirmed that the rail line was coming and that a new town to be called Waskada was being surveyed. As elsewhere, this event signalled important changes in the commercial and social lives of settlers. Until this time businesses such as stores, post offices, blacksmith shops and gristmills were operated on the individual properties of homesteaders. The railway brought the creation of towns, and towns then became the most logical place to do business.

In the fall of 1899 William Hotham started building a boarding house and W. Stovin had dug a basement for a store. On October 8th Ren and two helpers joined the building boom and erected a small workshop, and on the very next day he was open for business. He was there ahead of the crowd, on a near-empty plot of land that soon would be occupied by a busy new village. 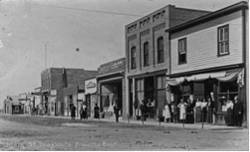 Waskada quickly became the service centre for the region.

Over a span of half a century, Ren operated his blacksmith shop. He had to rebuild it twice. His wife often helped him in the shop and together they lived and worked through countless changes in agricultural methods. Their son Roland had been the first child born in the new Village of Waskada in 1902.

The Blacksmith Shop, like so many “Repair” businesses, faded into memory as fixing parts gave way to replacing parts. Advances in transportation links, more standardization of implement parts, and more sophisticated networks for delivering those parts, all played a role.

Many of the tools he used over his long and productive life are on display at the museum. Ready to be used.

Mr. and Mrs. Ren Amos on their 60th Wedding Anniversary.