The Beginning of a Collection

When we think of museums, usually we think of a building filled with heritage artifacts and displays. The Waskada Museum, however, has made its buildings as much of a feature as the artifacts that fill them. In 2013 the Museum Committee celebrated adding their 6th building to their collection.

How did it all start? In 1967, Canada turned 100 years old and celebration events were held across the country. In Waskada, local residents got very excited about displaying their old artifacts: pioneer items, tools, farming equipment, etc. At the time, the old MacLean’s Hardware store was vacant, and it was used as a display space during the festivities.

Three years later, at the Manitoba Centennial, the village of Waskada repeated the museum display idea, only this time they found that after the celebration many people didn’t want their items back. A Museum Committee was formed and went about trying to find a permanent location for the items. 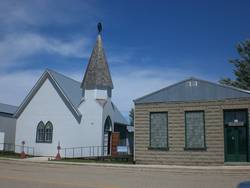 The Royal Bank and Anglican Church were the Waskada Museum's first two buildings.

The museum’s first building was built in 1906 by the Union Bank, but was taken over four years later by the Royal Bank. Ray Straus was bank manager for the Royal Bank when the museum was looking for a space, and he was also on the museum board. In 1967 a new hotel went up in town and a new Royal Bank opened up in that building, leaving the old one vacant. Straus convinced the bank to donate the old building to the museum.

It soon became apparent that one building was not enough, as they very quickly ran out of space in the bank. At that time the Anglican Church, built in 1914, was sitting empty a few blocks away, having ceased operating in 1950. The Museum Committee moved the church beside the bank in 1975 and soon had the building filled with more artifacts. They further enlarged this space in 1978 with a pole shed addition onto the back.

Elwood Heath was a local farmer and a member of the Museum committee. He had a number of large agricultural vehicles and implements (a collection of steam engines, binders, threshers, tractors etc) that he wanted to donate to the Waskada Museum, but at that time there was nowhere to put them. One morning he stopped Hilt outside the coffee shop in Waskada and suggested that he would personally donate $10,000 towards the building of a shed to house these vehicles. Hilt couldn’t believe his ears. The committee solicited further donations from residents of the district, and along with some grant money they were able to build a structure with 4200 square feet in 1999. 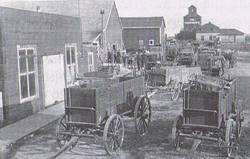 The blacksmith shop is visible on the left side of the photo. Circa 1909.

In 2000 the Museum Committee acquired a blacksmith shop that was across the street from the rest of the Museum complex. Blacksmith shops back in the day were a key part of agricultural success: farmers couldn’t start turning the sod if no one was around to sharpen their plows. Ren Amos built the first blacksmith shop in Waskada in 1899. It burned down and he replaced it with another building that lasted until 1927. In that year he built an all-cement building that exists to this day. After Amos was done with the building it was used as a storage shed for the town until the Waskada Centennial. Today, the shop looks very much like it would have in 1927: it is decked out with hammers, anvils and a forge and is fully operational.

Also acquired in 2000, the coal shed was bought for $1.00 from the Paterson Grain Co. and became a display space for many artifacts. The coal shed was once a staple building in any community that wanted to stay warm in the winter. All elevator companies had a coal shed that sat beside the railway track, near the elevator. The shed had four big doors on one side where the coal was unloaded from the train car into bins in the shed, and another four big doors on the other side where customers could load the coal onto their wagons to take to their homes. In town there was always a drayman whose job it was to deliver coal and other freight with his wagon/sleigh to people in town.

Though the Menota School hosted its last class 60 years ago, the building continues to take on an educational role as the newest addition to the Waskada Museum’s collection.

Though there is very little information about the Menota School, its story is similar to that of most rural schools. What could be the earliest register dates back to 1888, when the school boasted 14 students. The schoolhouse closed permanently in 1952 and the district was later dissolved in 1959. This is a common story for schoolhouses of the era, as the rural school districts were consolidated and more spacious schools built in larger centres. Menota school, located about 15 kilometres north of Waskada, closed before the general consolidation of rural schools and students scattered to attend other rural schools in the area.

The Waskada museum had their eye on adding the schoolhouse to their collection of historic buildings for ten years before the farmer who owned the land could be convinced it was a worthy idea. In 2009 the Waskada Museum Committee started moving the school. They were able to move the porch themselves, using a front-end loader to lift the little building onto a trailer. It was then hauled by a tractor into town. They poured a new foundation for the school and the main body of the small heritage building was later moved onto it by Smitty the Mover.

Renovations were carried out to preserve the schoolhouse and spruce it up—the building had not seen occupation over half a century. For a few years after it closed the building had been used to store grain, and it was quite a mess when the museum committee got hold of it. Using a grant from the Community Services Council, new windows were put in, the interior woodwork replaced and the roof reshingled. Norm Reid, a very active and dedicated Museum Committee board member, did the interior painting and decorating before old-style desks were moved in.

In 2012 the finishing touches of a flagpole and faux chimney were added to the schoolhouse. The building is now a regular part of the museum’s display, furnished with a teacher’s desk and bell, old water fountain and old-fashioned outdoor toilet.

At present, artifacts in the museum's collection include a silent movie projector, settlers' tools and memorabilia, gramophones, a loom, an old country store display and a mounted whooping crane circa 1906. It has one of the best collections of thresher photos in Western Canada. Buildings around the museum house antique cars, trucks, firefighting engines and a working steam engine.

Today, the museum is an important part of the community, attracting visitors from far and wide. It displays “items and memorabilia from the past that will in their own way convey some sense of our history.”