Manitoba’s borders were extended to reach the present-day Manitoba/Saskatchewan border in 1881.

How this prairie province grew from a “postage stamp” into a “keystone.” 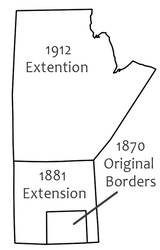 The original size of the province was only one-eighteenth its present size. It was referred to as the “postage stamp” province due to its square shape. The following decade saw thousands of settlers moving into the province and past Manitoba into the North West Territories. In 1881 Manitoba’s borders were enlarged in order to control the pattern of incoming settlement. Land mostly to the north and west was added to the province, quintupling its size. The Manitoba-Ontario border took a further 74 years to be determined. The town of Rat Portage (now Kenora), especially, was caught in the middle of an inter-provincial dispute over who was in control.

The present boundaries of Manitoba were set in 1912. The northern limit of the province runs along the 60th degree latitude and the northeastern part of the province was enlarged to border Hudson’s Bay.

Manitoba continues to be the gateway into western Canada. It is sometimes referred to as the “keystone” province of Canada: the centerpiece of the architecture of the country, holding everything in place.

Graphic: Adapted from above source.