Rise of the Métis Identity

A new Nation born on the North Western prairies

Today the Métis in Western Canada are an established Nation who take pride in their history and culture. However, it has been an uphill climb spanning centuries to overcome such obstacles as armed conflict, discrimination, poverty and unequal opportunity.

Born into the Fur Trade

The Métis were born from and into the fur trade. The growth of the Metis sense of identity was therefore due in part to the motives of that economy. However, there were many other factors that contributed to the Métis sense of nationalism. The western plains in the 18th and 19th centuries presented specific conditions into which the Métis rose as a political and cultural identity.

The mixed-blood group of people that became the Métis had its beginning west of the Great Lakes – mainly the Red River Valley and the interior plains of North America (and to a lesser degree on the western shore of Hudson Bay) as early as 1740. This was where European (English, French and Scottish) trappers met Aboriginal women, creating unions which produced children of mixed blood. By 1770 villages in these areas had large populations of individuals with mixed ancestry, though at this time these people did not identify themselves as a separate ethnic group.

The crystallization of the Métis identity is due in part to the motives of the fur trade. The Hudson’s Bay Company (HBC) was incorporated in 1670 out of London and soon claimed a monopoly over the fur trade in western Canada. Up until the 18th Century the HBC found it unnecessary to travel inland, instead keeping its forts on the edges of Hudson Bay and attracting Aboriginal peoples to travel to the Bay to trade with them. In about 1760 fur companies out of Montreal began to move up into Western Canada, forcing the HBC to move inland. A rivalry grew between the HBC and a Montreal company, the North West Company (NWCo) between 1785 and 1821. The primary battle ground of these two companies was the Red River Valley, where violent conflict sometimes took the form of attacks on one another’s forts.

Threat to the fur trade as the primary economy on the prairies was felt as early as 1812. In this year the Earl of Selkirk sought to establish a group of Scottish settlers at Red River. The HBC supported the settlers’ presence on the prairies because it brought them a cheap source of labour and provisions, and served to reinforce their trading monopoly over the region. The settlers soon found, however, that they were having difficulty producing enough crops to survive and were facing starvation as winter drew near.

The Battle of Seven Oaks 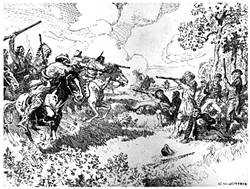 The Battle of Seven Oaks brought the Métis together in defense of their Aboriginal title to land for the first time.

To benefit the struggling settlers, the HBC passed a Pemmican Proclamation in 1814, declaring that no one could export pemmican out of the Red River colony—it would instead go towards feeding the settlers. The NWCo protested this proclamation because it seriously affected their trade. In 1816 the company roused up some of their Métis employees from Qu’Appelle, SK and, led by Cuthbert Grant, they raided an HBC post and stole a supply of pemmican. As they were skirting their way around the Red River colony, government officials led by Governor Semple went out to confront the Métis NWCo employees. Semple argued with the party and eventually a gunfight, known as the Battle of Seven Oaks, ensued.

At the end of the battle only one of the official party remained alive and the Métis had suffered only one casualty. This was the first armed conflict entered into by the Métis, and they felt the victory not only as NWCo employees, but also as an emerging cultural group who had an Aboriginal claim to stake in the North West Territories.

In 1821 the rivalry between the HBC and NWCo came to an end when the two companies amalgamated under the name the Hudson’s Bay Company. Many Métis lost their jobs with the NWCo as a result of the amalgamation and settled at Red River, swelling the numbers of the colony. From 1820 to 1870 the Métis were the dominant inhabitants of the Red River settlement (what became Winnipeg) as it developed into their economic and social centre. In the 1871 census the Métis made up 10,000 inhabitants out of a total of 12,000 (over 80%). Here they took on the characteristics of a new nation and implemented their own form of self-government.

With the loss of the fur trade, Métis began looking for another source of income. They found it in the bison hunt, which became their trademark occupation. Twice a year the Red River settlement emptied when the Métis took off in their red river carts to sweep the northwestern plains in pursuit of the bison. These were very well organised affairs and taken very seriously by all involved. From these hunts, the Métis produced pemmican—a compact and nutritious staple which sustained the rest of the fur trade. The bison hunt was one of the most important contributors toward the historic Métis identity. It brought the Métis under a common purpose and became a lifestyle in and of itself.

In 1860 the HBC lost its royal charter and the monopoly of the fur trade. By this time the fur trade was a waning economy and in 1867 the HBC sold nearly all of its land (the watershed of Hudson Bay, an area known as Rupert’s Land) to the Dominion government of Canada for £300,000.

The government’s primary objective at this time was to ready the West for settlement. It wasn’t long before surveyors began their work of breaking up the prairies into the grid system that is in place over southern Manitoba today.

The Red River Resistance was the result of Métis unhappiness when surveyors started running lines over their long lot properties along the Red and Assiniboine Rivers. They rallied behind Louis Riel and set up a provisional government. Riel argued that before a land transfer could take place the government would have to negotiate with them. The demands of the Métis led to the passing of the Manitoba Act in 1870 which established the Province of Manitoba and set aside land to be used for the benefit of the children of the Métis in recognition of their Aboriginal title. The Red River Resistance brought the Métis together further into a sense of political cohesiveness.

The government handed out land to the Métis in the form of scrip. Scrip was a certificate that entitled the holder to a specific amount of either money which was redeemable only for land or land itself. However, through the fraudulent activities of land speculators and a Canadian government that was intent on controlling the development of the West, the Métis were swindled out of most of the land that they were entitled to. Many got frustrated by the process and moved west – away from the disruptive influences of the Canadian government – selling their title for a fraction of what it was worth.

Of course, the government surveyors moved west as well. In 1885 they reached Saskatchewan and began running survey lines over Métis properties there. This created a second conflict, known as the North West Resistance where the Métis again tried to assert their nationalism in the face of government pressure. Enlisting the aid of First Nation allies, the Métis staged a series of battles which culminated in a defeat at the Battle of Batoche.

Resurgence after the Dark Years

The result of the battle scattered the Métis people and marked the beginning of a period of dispersion. Fearing for their lives Métis people changed their names and fled in all directions, some moving to the United States while others went back to their First Nation families and became treaty “Indians”. Others denied their native heritage altogether. These were dark times for the Métis, a time of persecution and extreme poverty due to their landlessness and general lack of education. It wasn’t until 1940 that the Métis culture began to make a resurgence. In the mid-1960s Métis organizations started to appear which began working towards boosting the social and economic position of the Métis in Canada. This cultural revival has proven to be of great benefit to communities with significant numbers of Métis – like Boissevain and Deloraine – as evidenced by increases in economic activity and cultural celebration.

The 1982 revision of the Canadian constitution affirmed Métis rights by declaring them an Aboriginal people of Canada and therefore eligible to receive specific cultural rights and recognition. In 1981 the Metis began a decades-long process to claim compensation for the land they feel they were swindled out of in the Red River valley. The Supreme Court of Canada is currently set to consider their argument and the Federal Government’s counter argument.

Today the Métis have reason to take pride in their colourful and historically rich culture. Their vitality has brought them through dark times into a place where they deserve to celebrate.