(1882 – 1920) The townsite of Moberly on the shore of Whitewater Lake was promoted as a resort town. It turned out to be a giant land swindle and the town never materialized.

The Lakeside Resort That Never Was

Looking at the marshland surrounding Whitewater Lake today – and especially at the lake's fluctuating depth and shoreline – it is difficult to believe that at one time a thriving holiday town was planned to occupy 80 acres of land at the southwest corner of the lake. But at one time it was true. Whether the town's founder, Benjamin B. Johnston of Emerson, Manitoba, genuinely thought that the site he chose would be ideal for a lakeside resort town, or was simply trying to get rich by swindling distant buyers who wouldn't have known worthless land even if they'd seen it, has never been clear. Due to a lack of factual evidence, the site could have been imagined to be a successful spot for hunting lodges, being so near to the lake frequented by all manner of waterfowl. Nonetheless, plans were laid out for the town of Moberly.

Though many towns of that era cropped up, survived for awhile and then died off largely because the railroad missed them, during the planning process Moberly was not destined to be one of them. It was to be a model town with carefully planned streets, Turtle Park at the centre and a long, curving esplanade along the shore of Whitewater Lake (or White Lake, as it was referred to at that time). 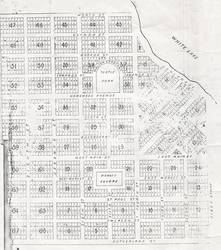 An elaborate town plan was drawn up for Moberly, but not one street or block was ever built. CREDIT: Boissevain and Morton Regional Archives

The bulk of Moberly's promotion occurred in 1882, a full four years before the area was serviced by the railroad. Posters and brochures sent to England, eastern Canada and the United States depicted a cheerful “children's book” train running through a town on the edge of a beautiful lake whose calm and peaceful waters stretched out to reach a shore met by picturesque, gently rolling hills. Anyone standing on the shore of Whitewater Lake today will attest to the fact that the nearest hill of any description is the Turtle Mountain, some five miles (eight kms) to the south. Also depicted was a long wharf stretching out into the lake with a large steamship riding quietly at anchor. Such a boat would surely have been unable to float in the shallow depth of Whitewater Lake. The brochures also boasted crowds of people upon the steamship, along the wharf, and strolling the esplanade.

Sources offer conflicting reports over whether or not any lots in the town were actually sold. Some say that none were, others say that some were bought by public auction, purchased mostly by wannabe settlers from Ontario. It is agreed that nothing was ever built on the townsite, and the model town that had been planned was not developed past banging stakes in the ground to designate each lot. In 1920 the plans were officially cancelled, 38 years after they had been approved by the land titles office in 1882. The lots were slowly re-purchased by the RM of Winchester and sold as farm land.

The shores of Whitewater Lake are known for their fluctuating levels. Even had the town been developed, it is quite likely that in dry years the town's sweeping esplanade would have bordered nothing but muddy lake bottom. And the railroad, when it finally came through, passed half a mile (800m) to the south. It may be that the town would just as easily have been abandoned like so many other small towns of that time.

CPR-Pembina Branch to Deloraine
The CPR reached Deloraine in 1886.

George Morton's Cheese Project
(1882 – 1883) George Morton launched a cheese-making project west of Whitewater Lake. He may have been successful if he hadn't overlooked a couple key factors . . .
Naples
(1886 - ?) Naples was a stop on the Pembina Branch of the Canadian Pacific Railway.