The ancient fossilized mammoth or mastodon tusk found at this site dates back over 33,000 years.

One of only three similar finds in Manitoba 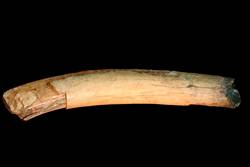 The 33,000 year old artifact sits in the Moncur Gallery in Boissevain, MB.

What’s the oldest thing you’ve ever seen? If you’ve ever visited the Boissevain and Morton Library you have been within meters of an artifact over 33,000 years old. And if you’ve further ventured into the Library basement to visit the Moncur Gallery, then you have probably even seen it.

One day in 1981 local dairy farmer Larry Black was removing gravel from a municipal gravel pit on the northern slope of Turtle Mountain, 22 kms southwest of Boissevain. While moving gravel from the pit he discovered a large white, curved object among the gravel. The artifact was discovered to be a tusk from a proboscidean animal – either mammoth or mastodon (see below), though a specific identification wasn’t possible.

When the tusk was first unearthed it was white. After several days of being exposed it began to discolour and turn “flaky.” At Brandon University it was coated with white glue to preserve it. The tusk gently curves along its 2 foot length and is 9.5 cms in diameter at its thickest point. One end is rounded and blunt, which suggests that the tusk was broken off before the death of the animal. Based on the size of the tusk and its lack of taper, it likely belonged to a mature female animal.

From BEFORE the Last Ice Age

At first it was expected that the tusk would date back to the last ice age, but in fact the tusk was radiocarbon dated to 33,860 years ago – this would mean that the animal would have lived ten thousand years before the advance of the last ice age. Artifacts such as these are incredibly rare, because the advance and departure of glaciers over North America rearranged the landscape and usually washed away or covered up such evidence. The tusk is from the middle of the Middle Wisconsonian era—the non-glacial period before the last glacial advance, which spans from 23,000 to 65,000 years ago. The climate during this era was slightly cooler than at present.

There is some mystery surrounding the tusk and how it came to be where it was. The fact that the tusk was the only fossil found at the location indicates that it was carried some distance by stream. But though the tusk was discovered in a gravel bed that was part of an ancient stream deposit, the tusk itself does not show signs of being abraded.

There are three possible interpretations for how the tusk came to be where it was found. Option A: the animal lived in the surrounding area, died near the pit site, and the tusk was the only part of the skeleton that rolled to the location where it was found. Option B: the animal died and its body (or at least one tusk) was buried some time before glacial advance, then a meltwater stream later dug up the tusk. Option C: the animal which carried the tusk died and the tusk was simply the only part of its skeleton deposited at this site.

This find is one of only eight proboscidean discoveries in Manitoba and one of three tusks, the other finds being teeth. It is one of only a few artifacts dating from the Middle Wisconsonian era in Canada. It confirms earlier findings in the Medicine Hat area that suggest large mammals roamed the southern prairie provinces during this period.

The term “proboscidea” refers to an order of animal identification that includes living and extinct elephant families. Mastodons and mammoths are two different species of ancient elephants. The difference between them is that mammoths are slightly larger than mastodons and they have much more hair. The range of the mastodon was restricted to North America whereas mammoth remains have been found in both North America and Northern Europe.

The end of the last ice ages spelled the extinction of both of these large mammals as a part of the megafaunal extinction. This was a time between 15-10,000 years ago where 85% of large animals became extinct due in part to climate change and human activities.

Note: The tusk sits in the Moncur Gallery in Boissevain.