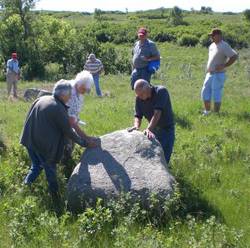 The TM-SPHA has organized very popular guided regional bus tours, for both the public and school groups. These tours have taken in lesser known heritage sites and stories that paint a vibrant picture of the past.

Check back with us soon for more details!

In backwards chronological order (beginning with the most recent).

Whitewater-Chain Lakes - August 2011 - "Explore what’s left of the ancient glaciers in our own backyard! A look at the sites and stories that surround these ancient and sometimes forgotten bodies of water." Leaves from: Deloraine

Turtle Mountain - August 2011 - "Due to the popularity of last year's Turtle Mountain, we are offering the same tour this summer! Join us as we explore the mountain from west to east." Leaves from: Deloraine 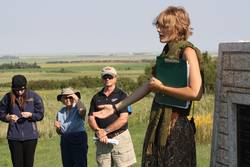 Whitewater Turtle Mountain Tour - September 2008 - During this tour, our aim is to lift out lesser known stories of the area. We’re hoping to add some depth and breadth to the already intriguing attractions in the area. Any one site or story has many windows to it. The stories herein point to the colourful array of personalities, struggles and generosities that have shaped us." Stops include:Strathallen School, Whitewater Village, Turtle Mountain Conservation District Observation Tower, McCharles Cabin, Billy's Point, Ducharme Property, Dunseith Trail, Skull Swamp, Old Wakopa Cemetery, Bill Kentner's Great Northern Railway Museum. Plus More! Leaves from: Boissevain