Fishing for Food, Legal or Not 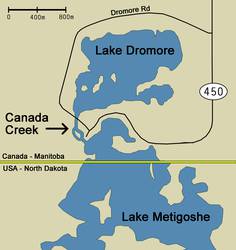 Lake Metigoshe has long been known for harbouring a large quantity of fish in its waters. It was even known as “Fish Lake” in the early days. So it should come as no surprise that the Métis community that developed around Metigoshe Lake after 1908 ate a lot of fish.

It didn't take long for the Métis to learn that for about four days and nights every spring a plethora of spawning Jack and Sucker fish came bursting into Canada Creek. The fish crowded through the short creek on their way from Metigoshe Lake into Dromore Lake where they laid their eggs. When the time in spring came, the word was excitedly spread throughout the community and families gathered along the creek with washtubs and copper boilers to fill with fish. Returning home with the next year's supply, the catch was first cleaned before being canned in salt and vinegar or ketchup. Even the Suckers, which weren't generally caught to eat, tasted just like salmon after they had been canned. So though it all tasted good enough. . . this fishing practice was technically against the law.

Fishing for Suckers wasn't illegal because they generally weren't sought after to eat. However, fishing for spawning Jack fish was illegal because of the impact it had on the fish species' reproductive cycle. Game wardens knew that the Métis were technically poaching the spawning fish, however they didn't go to the area to investigate unless there was an official report. The Métis weren't selling the fish they caught, only using it for their own personal food stores.

Beginning of the Metigoshe Community