The first permanent Métis settlers moved to Turtle Mountain in 1908. The first group were descendants of the Red River Métis and came north from living in Belcourt, ND. These first settlers were Elzear (Zero) McLeod, Billy Gooselin and Louis Racine Sr. and they settled just north of the USA-Canada border on the western end of Turtle Mountain. The following decades saw more families move into the bush land surrounding Lake Metigoshe, Lake Dromore and Sharpe Lake (at the time known as Long Lake). Some European settlers married into Métis families and the community grew.

(Also see: the Beginning of the Metigoshe Community.)

Economic activities of the Métis living on Turtle Mountain consisted mostly of fishing, hunting and trapping. They also made a living with mixed farming: planting crops and raising livestock. Men cut posts or firewood to sell in town or hired themselves out to farmers in the area. Two brothers once earned money by taking farmers' cattle to graze in the lush Turtle Mountain Forestry Reserve during a drought. 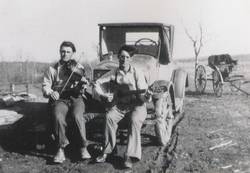 Everyone was more or less hard up for cash. No one had fine clothes and garments were often homemade and repaired at home. There was a rumour that if a family went on welfare, their kids would be taken away as soon as they turned 16. More often than not families preferred to tough out the hard times instead.

Proximity to the United States

There was lots of back and forth visiting over the Canadian-American border, as many of the Metigoshe Métis had family and friends living just over the line. Picnics and ball games were held close to the border. One story reports a game that was played straddling the borderline so that if officials approached, the ball players could run to whichever country they held official citizenship in. To take it one step farther, one man owned a house that was built half in the US and half in Canada. When the law came he would run to his side and the woman he lived with ran to hers!

The highlight of the year in the Metigoshe community was the celebration of Christmas and New Year's. Three or four families hosted each celebration while the rest of the community travelled from home to home, eating, drinking tea and visiting. Baking and cooking was abundant for these festivities: pies and cakes, cookies and bread, chickens, ducks, turkeys and always bullets (meatballs with sauce). If someone was sick or housebound, members of the community would bring food as gifts to that home.

People did not generally visit the doctor unless they were at death's door. Home remedies were used to keep everyone healthy. A kind of cure-all medicine was skunk scent, which was known to cure the most tenacious cold and chase away the measles. Local midwives took care of births, and no major problems were ever recorded.

Homes were often located within a stone's throw of one another. Neighbours saw each other every day and were generous when it came to lending a hand. The Métis women in the bush were good at taking care of their household needs without a nearby general store to depend on. Using the ashes from the fireplace they made lye, an ingredient that was used alongside tallow to make soap. Churned butter could be traded for other groceries at Daggard's Store. The log houses that the Métis built were often whitewashed with a plaster formed out of lime, straw, white clay and water. In the absence of iceboxes, perishables were lowered into the well in sealed containers.

A game of baseball was a must after church every Sunday if weather permitted. Teams from other towns played against the Métis and though they were called names by their rivals, the Métis teams often went on to win the game. Afterwards a dance would likely take place usually at Billy Gooselin's place, also known as Billy's Point, on Dromore Lake where fiddlers and local orchestras made the evening lively.

The Turtle Mountain Métis formed a local of the Manitoba Métis Federation in 1972. The not-for-profit, self-sustaining organization enjoys a membership of about 130 people and holds year-round activities. The most notable celebration is Métis Days which is held every summer.