In the extreme southwest corner of the province of Manitoba there sits the ruins of a small church. The roof is gone and the stones that made up the walls have tumbled both inside and outside of the structure where shrubs and larger chokecherry bushes serve to disguise them. Wooden boards that were built into the stone walls are black, evidence of destruction by fire. Considering the church is 120 years old, it is understandable that the building might be showing some wear. However, there is a story behind the charred wood and tumbling stonemasonry that offers a glimpse into a time well passed.

The Copley Church, seen here before the building fell into disrepair.

European settlement made its way west of the Souris River in 1882. Among these settlers was a group of Church of England members who were eager to build themselves a church to complement their new prairie lifestyle. By the late 1880s there was sufficient interest in the region to prompt Mr. Gale (living in England) to petition friends in London and the Church of England Missionary Society for financial assistance to support the project.

The settlers themselves supplied the volunteer labour to build the church after funds had been secured. The site that was chosen covered almost five acres and was located four miles from the Saskatchewan border and only two miles from the United States. Construction of the building began in the fall of 1890, as volunteers hauled local sandstone, sand and gravel to the site. The church was built with 11 Gothic style windows, a porch and two doors. The interior walls were plastered and the area around the altar panelled with wood. Construction continued through the winter of 1890 and all of the next year. By the spring of 1892 the building was ready for use, and the first service was conducted by the Reverend J. Boyne.

The church was consecrated in the fall of 1892 as St George’s Anglican Church. Locally it was known as the Butterfield or Copley Church. The name Butterfield was taken from an early post office that served the area and Copley was the name of the school district the church was built in, which was named after an early settler.

A small cemetery was soon established on the west side of the church. The first burial in the cemetery took place in October of 1892 after the death of young Claude Gale, the infant son of Mr and Mrs Goddard Gale. There are reportedly 11 graves in the cemetery, though only three headstones exist on the site today. 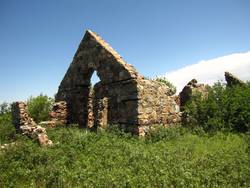 Ruins in southwest Manitoba! The stone walls of the Copley Church still exist at the site.

The establishment of the church added significantly to the community of Copley, but it was a rather short-lived contribution. The late 1890s and early 1900s brought poor weather, poor crops and poor prices. These discouraging conditions caused many families to leave the district, which led to a decline in the number of church members. The church was finally deconsecrated on June 13, 1913 – the same day that a new Anglican church, St. John’s, was founded in [Pierson[(article=pierson).

After its closure the small rural church became neglected and fell into disrepair. Weeds grew in the cemetery, and the unfenced churchyard was used as a cattle pasture. During prohibition years the church was used by rum-runners who valued the site for its isolated location and proximity to the American border.

Eventually, locals realised that the church needed to be protected from vandalism and weathering. In 1932 a work party appeared on the site due to the efforts of the Reverend J. I. McKinney of St John’s Church in Pierson. The churchyard was fenced and the windows and doors boarded up. That September a commemorative service was held at the church to mark the 40th Anniversary of the church’s founding. The event was attended by 300 people. Some of the original choir members sat in the choir loft during the service and M. J. Basted, then the Reeve of the RM of Edward, resumed his place as organist.

Since the 1930’s the church has continued to deteriorate. A herd of cattle got into the building and damaged many of the pews. The roof was getting to be unsafe, which led the rural municipality of Edward to decide to burn the church down in order to escape possible injury in the future. They received permission from the Anglican Diocese in Brandon and set fire to the church in 1990.

The Copley church served the early settlers of the district for a short 20 years of its much longer lifespan. The site remains mostly silent today, as the surrounding bushes grow taller and conceal the remains of the church that once fulfilled the dreams of the settlers who built it.

Davidson, Connie. "Gnawing at the Past". Brandon: Leech Printing Ltd, 1970.