Retelling History: Elder, healer and activist Eva McKay tells of the gross misinterpretation of history as it describes her people

Eva McKay visited Deloraine in the 1980s to speak to Bob Caldwell’s grade 11 class. After school she took a personal trip with Bob Caldwell to visit for the first time the land that used to be Turtle Mountain Reserve (IR60). That evening, Eva presented a speech in Deloraine. Her words poignantly describe the struggle Dakota people still feel to belong in a land that was always their home. 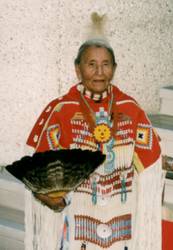 "They Said This Was Grandmother's Land"

“Sometimes the history doesn’t tell the way it was, and today I’ll try to share with you some of the stories of our people.

“There was a family of about 25 who had come across the border during what we called the ‘Broken Egg Incident of 1862.’” (In what is now Minnesota.) “There are different versions of how these eggs were broken and how the farmer’s wife got mad and took a broom and hit one of our Indian warriors. When he went back to where his friends were, his brother-in-law made fun of him and said jokingly, ‘You are afraid of a white woman.’ He was insulted by the brother-in-law’s remarks of being a coward. He went back with three others and he killed the farmer’s wife. This is where the 1862 Dakota Uprising started.

“The story said that the Dakota ‘fled’ into Canada, Grandmother’s country. But they didn’t flee; they just walked away. They didn’t come in a group or a band, they came in families. The Sioux people travelled all over and no state was their home. When they came into Canada, they came home. They said this was Grandmother’s land. So they came back and this was not a foreign country. Minnesota, North Dakota and Canada, this is all their home land. We are the descendants of those people who did not flee but they walked away.

"Do You Call That Begging?"

“Our people suffered much and the history books say they went around begging. In our Indian culture, no Indians begged. Indians shared with each other the things they had. It was their way of life, and if I went to Bob and said to him, “Could I have some bread tonight? I will repay it tomorrow,” do you call that begging? There was always sharing and they did not go without. But when times were hard, when whoever came and they took over the hunting grounds and there was no more buffalo, then our people suffered. They did not blame anyone, but they said it is the will of God. We are suffering because of those acts of violence that our relatives committed down south.

"The Future is at Stake"

“The Indians of North America shared this great country with those people who came across the big waters. Many people took advantage – the oil, the gold, you name it. Our grandparents, my people shared. But some greedy people just took over, and what we have now is very few acres. The future, not only for the Sioux people, is at stake.

“But we have, instead of the land, another source of life. If it is not the reservation, then it’s got to be education. Education of our people through the advice of the elders. The spiritual people, the traditional leaders of our own people gave us the strength to be able to survive in spite of what has happened to the Indian people.

“At this time the history books about the Indian people tell a story that was researched and written by some people who didn’t understand. But our own story is the story about the loss of identity, the spiritual life as we understood it; the cultural values of one’s life.

“Maybe a lot of you wonder what a sweat lodge is all about. This is something that we have never really shared with anyone because our cultures, our traditional values for many years, we kept under the table. But if we are going to live as a big family, we sure would like you to know what happens to us in our daily lives. This is what we are trying to do now; sharing our way of life for a better understanding.

"We Would Like to Be There to Tell the Story"

“We need to stand up and see the world around us, see what has happened, and if I can make it a better place by sharing a bit, I will look back and say ‘thank you God for giving me life.’ Thinking back 50 years ago, these things happen – these bad experiences. But they soon balance out and you come to the conclusion and say ‘Life has been good.’ “If there is going to be any more history to be written, I believe it is going to be written in a way that we know it happened. We will be a part of that history-making. We would like to be there to tell the story.”

Residential Schools: The Breakdown of the Family

“Fifty years ago, I was a young girl of seven. I was a traditionally-taught girl who at that age was looked at as an adult. Our childhood was when we wore diapers and nursed from the mother, that was childhood. When you began to learn and began to walk, when you can talk, that is when the teachings of life are given to you. The first teachings that we had, when I was able to understand, was what my Grandmother said to me: ‘You were born a girl. You were born a woman and your role in life is to be a mother.’ So I knew what my role in my life was to be.

“Then at the age of 7, I was told that I had to go into school. These institutions were throughout Canada and they are known as the residential schools. The residential school is where we had many experiences with a culture that we didn’t understand. What it was like to be taken away from your home and put into such an institution! Through an interpreter we were told to talk English. The missionaries said, ‘My God is better than your God. You listen, you talk my language, you read this book, for this is the truth.’ The missionary tried to teach us their way of life. And maybe they thought that what they did was right, but there was a misunderstanding that one person could change the person that was. After 10 years I came out very confused; many of us came out confused. We were caught in between two cultures: the Indian culture and this culture of the white people.

“I believe that was the beginning of the breaking up of the family unit. The family is the center, the most important unit in a town or a community. And after 50 years, you can see for yourself what has happened to the Indian family. Today the laws of our country, our identity of the sacred language which was a God-given gift, was taken away. And we suffered much. That was the beginning when the family structure began to weaken.

“Families broke up and many children suffered. We lost so many children through adoptions. We have our own workers now that take the place of the social workers. It is the same with education; we have native teachers now. We are becoming involved with education so I think we have come a long way.

“I understood that the missionaries didn’t understand us and we didn’t understand them. So there was a conflict. But after 50 years I think we are going to open the way now by sharing. We can’t say that we were perfect, it is a balance of good and bad, but that is life, we did our best.

Eva McKay of Sioux Valley Dakota Nation spent her life serving her people and her community.

Born in 1920, Eva grew up two miles south of Portage la Prairie. In 1934 she moved to Sioux Valley First Nation. There, she was the first woman elected to the Band Council, where she served four terms.

Among her life’s accomplishments is the establishment of the Brandon Friendship Centre in 1964 and the Manitoba Indian Women’s Association in 1969. She, among others, brought education under local control with the completion of the Tatiyopa Maze School at Sioux Valley in 1979. She served on the National Parole Board in 1996, and was actively involved with the Canadian Panel on Violence Against Women.

Eva McKay was a cultural worker for 10 years with the Dakota Ojibway Tribal Council. Also active with the Dakota Ojibway Child and Family Services agency, she served as a foster parent for teenagers for many years—this alongside raising 12 children of her own. A respected elder, Eva was on the Self-Government Advisory Committee for Sioux Valley. For 30 years she was a member of the Advisory Elders Panel at the Brandon University. Eva McKay died in 2005.