Home of the Boissevain and Morton Library and Archives

The Turtle Mountain-Souris Plains Heritage office in Boissevain is in the basement of the Civic Centre, which is attached to the Library building next door. This has made it simple for me to access the library’s reference materials and their archive collection. I have become quite fond of the library building over these last few years, though I understand that the building is no longer meeting the library’s needs. As the library looks forward to moving into a new space sometime in the near future, I wanted to take a moment to find out the history of the building whose future is now unknown.

Artist Brad Romagndi based this mural on the inside of George King's General Store. It can be seen at the corner of Mill Rd and South Railway St in Boissevain.

The Importance Of General Stores

The first three buildings built in the new town of Boissevain were all general stores. This is an indication of how central the general store was to early European settlement culture. The general store carried practical day-to-day items that everyone needed: clothing, groceries, hardware, tools, soap, etc. But it was also a gathering place, something like the present-day coffee shop. The general store usually had a wood stove which heated the building and provided a place for locals to warm themselves, catch up with neighbours, grumble about the weather, the state of crops or swap political views.

The shopping experience of the general store was much different than we are accustomed to today. Many items were on display, but the shopper did not pick them up, instead they asked for them. Most foodstuffs were kept in bulk that a shopper would ask a clerk to measure out for them. Anything from sugar, flour and salt to cheese, oil and vinegar were measured out in this fashion.

The building that used to house the George King General Store dates back to 1904. At that time, McCallister and Robinson were partners operating the store they called The Bargain Centre. They sold mostly groceries and men’s wear. In 1907 William P. McAvoy replaced McCallister as a partner and by 1919 McAvoy was running the business by himself. George King came on the scene in 1922 and bought William McAvoy out. For the next 35 years the store remained in the King family. 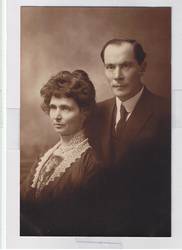 George had come from Stafford Ontario where he was born in 1878. He arrived in Boissevain in the spring of 1897 looking for work. He took his first job in Ninga for a year before returning to Boissevain. Once he was settled, his mother and brother arrived from Ontario to make Boissevain their home also. A few years later, 1905, Josephine Dayment and her younger sister Clara moved to Boissevain and opened a dressmaking business. Josephine married George in 1909. George worked a few years for general store owner Alexander R. Welch before going into business on his own.

King’s store had three sections, divided by small steps of stairs. At the front was the mens and ladies clothing, the middle section held the groceries and the rear of the store was reserved as the stock room. King hired his sister-in-law Clara to run the dry goods and clothing sections of the store. She did this for 25 years, until 1947. George King quickly involved his sons in the business. Seven years after opening, his son George Jr joined his father at work every day and though Ned was still in school he delivered groceries after class.

The 1930s brought grocery store chains to Boissevain for the first time, spelling the beginning of the end for locally owned and operated general stores. In 1938 George King joined the Red and White grocery chain.

In 1951, King brought his sons into the business as official partners and “King’s Red and White” became “George King and Sons Red and White.” George Jr and Ned took over from their father completely in 1952. They closed the store in 1957, the same year as their father’s death. The Boissevain and Morton Library moved into the building in 1959.