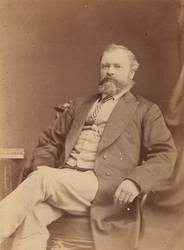 George Morton earned the title “Cheese King of Canada” while working as a cheese factory owner in Kingston, Ontario. He first came to the Turtle Mountain area in 1878 and saw the potential for large-scale cheese production. Especially in the vicinity of Whitewater Lake he was attracted by the rich hay land that borders the shoreline. He persuaded businessmen in Kingston to invest in the Morton Dairy Farm Company and received (via his business connections with John A. MacDonald the right to purchase 72 square miles (184 kms²) of land west of Whitewater Lake. He also received a confirmation from the CPR that a railway would be built through his land.

Each settler involved in the venture occupied on one quarter section of land with a small herd of dairy cattle supplied by the company. Morton bought the Lake Max Sawmill already in operation to supply lumber for his settlers, and he laid out a townsite on the northwest corner of Whitewater Lake to become a business centre and community base. It seemed that everything was in readiness and the venture was destined for success.

There were two factors that led to the project's failure. One was the difficulty of transporting the product to far-away places. Morton relied on the promise that the CPR would be coming through the area in time and in place to transport his cheese out of Manitoba, but it failed to meet both of those demands. The railway wasn't built past Whitewater Lake until 1886, and then farther south than Morton had been told, missing his land by a few miles. The second factor that led to the project's demise was the farmers' lack of vital experience to keep cattle through the vicious winter.

During the summer of 1882, dairy colonists brought 1,000 head of cattle from Emerson and Brandon and built corrals walled with tightly-packed swamp hay, open to the sky. During the winter, instead of being let out to generate heat by movement, the cows were tightly packed in their corrals. As the sub-zero temperatures and storms of a prairie winter set in, hundreds of cows froze where they stood. Such a heavy loss ended the cheese project, but Morton had not lost faith in the agricultural potential of the area.

In 1883 Morton bought a store in the village of Waubeesh, a settlement established by John Brondgeest southeast of present-day Whitewater Village. In that same year Morton set up a store and sawmill closer to Turtle Mountain, establishing Wassewa. The name means “Good or Friendly Light” and was chosen by First Nations in the area because of the lantern that Morton hung on the store gate to help guide passing travellers. When the railroad came to Boissevain in 1885, Morton moved the Wassewa store into the town to be located alongside the tracks where it became Boissevain's first building and business. By this time Morton was 66 years old but he was far from slowing down. Instead, in 1888, he went on to build an elevator in Whitewater to cut in half the distance farmers from that area would have to travel with their grain.

The End of a Journey

Late in 1891, Morton set out on a business trip but fell ill on the train and returned to Boissevain where he died on December 22. Active until the end of his life in community affairs and keenly interested in the well-being of his pioneer neighbours, Morton is remembered as the “Father of Boissevain.” In 1890 the Rural Municipality of Morton was named in his honour.