The Need for a Wind Break

Stately rows of trees line the gravel roads near Lyleton, Manitoba. From the sky one could imagine the fields of the region resembling a striped tablecloth that has been draped over the landscape, changing colours with the seasons. Regardless of the poetry one could write while considering such a metaphor, the planting of the shelterbelts in and around Lyleton served a much more practical purpose. 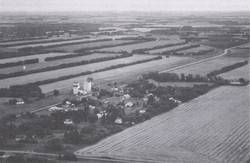 The shelterbelts near the town of Lyleton are captured in this picture: looking northeast in August, 1979.

Settlers first arrived in the area of Lyleton in the 1880s. They found in front of them an almost endless expanse of native prairie grasses, bending to the will of the wind. The intended purpose of the settlers who populated the region was to farm. Therefore, these native grasses were tilled under without a thought to what their absence would mean: prairie winds gusting unhindered across the landscape.

In 1935 the Government of Canada launched the Prairie Farm Rehabilitation Act (PFRA). The following year two Lyleton locals, Baird and Will Murray, petitioned the PFRA to establish the Lyleton Shelterbelt Association. The PFRA provided $5 per mile of planted trees, with an additional $20 per mile, per year for the following three years of maintenance.

The first of many shelterbelts to be planted in the region was completed in 1936. It consisted of 2,300 trees which were planted in a row measuring half a mile on C. E. Fennell’s farm.

At first, caragana trees were thought to be the most appropriate tree to combat soil drifting due to severe drought. However, the caraganas ended up suffering from local blister beetles, which regarded the trees as an exciting new source of food. Additional varieties of trees planted afterwards were ash, elm, maple and willow.

In line with the hopes of local residents, the trees were found to be very effective at keeping soil erosion to a minimum. They also kept winter snows from blowing away, conserving more moisture on the fields. The shelterbelts were instrumental in retaining the viability of agriculture in the region during the Dirty Thirties and afterwards.

The trees also changed the aesthetics of the region. Where previously a vast area of open cropland had existed, there appeared 30- or 40-acre strips of land, bordered on each side by arrow-straight rows of trees. Wildlife, too, found the trees to be an attractive addition to the region. Moose, elk, deer and sometimes cougars have found accommodating habitats within the shelterbelts. New species of birds have found homes in the tree branches, adding their song to the area. The region continues to be a popular birding destination today.

The Project is Extended

The project was set up to run for only five years, but due to its success it was extended several times, and ran for a total of 23 years. By the project’s end in 1959, 97 farmers had been involved with the planting of 364 miles of shelterbelt, made up of 2,386,000 trees, over an area of 60 square miles. The expense of the project to the federal government was $28,000. Most of the trees were planted by hand and maintained using hand-held hoes. Many of the shelterbelts planted in the 30s and 40s remain today, though the need for them is not as critical as it was in the years of dire drought. Recently farmers have begun tearing down the trees in order to increase the amount of land available for crops.