The fight to build and keep a rural railway line

No single event changed the fate of Western Canada more than the coming of the railroad. In 1881 the Canadian Pacific Railway Company (CPR) received a charter to link the east and west coasts of Canada with tracks of iron.

In addition to receiving a monopoly on the main transcontinental line, the CPR was also given the right and responsibility to build branch lines 80 kms to either side of the main line. No other Canadian company was permitted to build a branch line inside CPR territory, therefore the company was able to advance at their own convenience due to the lack of competition.

Settlers in the area of Waskada and Goodlands in southwestern Manitoba waited in great anticipation for a branch line to be built through their communities. Year after year the CPR announced that there were plans in the works to build a line that would run southwest of Deloraine to Goodlands, Waskada, Coulter and Lyleton, yet year after year the rail line failed to become a reality.

Locals were frustrated because they keenly understood that rural access to a mode of transportation was vital to an agricultural economy. The train brought supplies, without which the practice of farming was much more difficult. In addition to transporting farm machinery, lumber, and coal, the train also delivered passengers and mail. 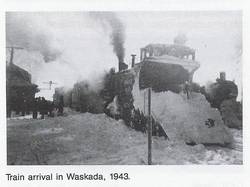 Repeated delays moved J. S. Thompson of Waskada to take the issue into his own hands. He began by trying to persuade other companies, such as the Northern Pacific and Great Northern companies from the States to provide competition for the CPR. After a number of years of trying unsuccessfully to persuade the Americans to build, Thompson and some neighbours formed a company themselves and sought a charter to build their own railway. After much difficulty they did receive a charter in July of 1899, but that very same day the lieutenant governor of Manitoba approved a bill which authorised the CPR to build a railway from Deloraine west to the Saskatchewan border. The governor defended this action by pointing out that the CPR could build a line at no cost to taxpayers.

Either way, a rail line measuring 28 kms long was laid southwest of Deloraine through the communities of Goodlands, Cranmer and Waskada. The first regularly scheduled train to Waskada arrived on New Year’s Day, 1900.

Later that year the settlement of Lyleton began to feel the need for a local railway. Several representatives from the Lyleton Railway Organization travelled to Brandon where they met with government officials. They requested that the line from Deloraine to Waskada be extended a further 32 kilometers to reach Lyleton. The minister of the interior offered a grant of $3,200 to the CPR (by the end of the project they spent $35,000) to build the requested extension.

By July of 1902 about 150 men were employed to lay the rail, accomplishing the task at about 2 kms a day. By September the track was ready for use, servicing the stations of Dalny, Coulter, Cameron and Lyleton. The entire length of track from Deloraine to Lyleton became known as the Lyleton Branch.

Train service along the Lyleton Branch improved over the years to include passenger trains, as opposed to mixed trains which carried both goods and passengers. Service from Winnipeg to Lyleton and Napinka occurred on alternate days. These trains also made a connection at Boissevain, serving the rural stations along the way. In 1910 the Lyleton Station was seeing a morning train depart six days a week, such was the demand.

A train service known as the Blue Flea used the track of the Lauder Branch. It was a mixed service (passenger and freight) that came out of Brandon, went to Napinka and Deloraine and then through Waskada to Lyleton. Some days it went from Brandon through Lauder and then along the Lauder Branch to Dand, Regent and Croll to Boissevain, before arriving in Deloraine and continuing on to Lyleton.

The Fight to Keep It

The train as a popular mode of transport was not, however, permanent. With the increased use of automobiles following the First World War, trains were used less and less often. A decline in rail service began as early as 1935, when only three trains left the Lyleton station per week. Around this time a hearing was held in the village to discuss the closing of the station and the abandonment of the line. The Community Hall was filled to bursting with angry Lyleton residents who strongly opposed the proposition. Despite this, the CPR wanted to close the line and in the 1950s passenger service along the line was discontinued. Though Lyleton retained its station and agent until 1971, the federal government implemented a rail line abandonment freeze from 1965 to 1975. Ultimately, the death knell for Lyleton’s railway was a natural one. In 1976 the Souris River flooded badly and washed out the bridge, never to be rebuilt. After this, rail service terminated at Dalny.

The remaining Lyleton Branch continued to service the stations east of the Souris River: Dalny, Waskada, Cranmer and Goodlands. But in the spring of 1978, local residents began to worry that what was left of the Lyleton Branch would also be discontinued. A rail retention committee was appointed to gather information and documentation in order to make a presentation to the transport commission. They travelled all the way to Ottawa to meet with the Minister of Transport. Due to their efforts, they received a promise that what was left of the Lyleton Branch would be safeguarded at least until the year 2000 if local elevators agreed to upgrade their facilities, which they did.

The railway was finally removed only four years before the turn of the century, in 1996. All that remains is the raised impression of the rail bed, which is still visible in many places.

“Fight to Save the Rail Line.” Brenda History Committee.