For thousands of years people living on the prairies determined borders by referring to the natural landscape. Rivers, mountains and hills acted as landmarks that clearly indicated direction and ownership. With the relatively recent immigration of European Settlers came the mentality of an agricultural people who believed in allotting land in terms of equality and uniformity. 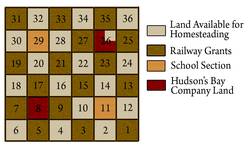 Each township is made up of 36 blocks, each measuring one square mile.

The first system of land survey or allotment to be adopted in Manitoba was the long lot system that the Metis applied to land immediately bordering the Red and Assiniboine Rivers beginning in 1813. Generally at right angles from the river, the long narrow lots gave farmers equal access to the resources of the river. In this way, water and fishing opportunities, access to the woodlands that bordered the river and access to the river itself as a mode of transportation was available to everyone.

In 1869, the Hudson's Bay Company (HBC) sold Rupert's Land to the Dominion Government of Canada, increasing the government's land five-fold. Agents of the government did not recognize the rights of the original possessors of the land. Instead, the government signed treaties with First Nations and offered land scrip to Métis children (though only after Louis Riel fought for this right). The government's interest was in populating the vast lands with people of European descent who would produce goods for both the European and emerging Canadian economies. The government was now faced with thousands of square kilometers of prairie to survey before serious homesteading and settlement could take place. First, the American grid system was proposed and the dimensions adapted to contain townships of 64 sections, each comprised of 800 acres. A noted change from the American system was reserving land to be used as a road allowance around every section.

Confrontations occurred around the Red River Settlement when surveyors ran base lines across long lot properties in St. Vital. Some Métis under Louis Riel instigated an uprising which halted the survey until 1871. When it resumed, the former grid system was re-evaluated and discarded in favour of a system with 640 acres per square mile and townships of only 36 sections.

The surveying of prairie land went ahead of settlement, taking no consideration for the natural contours of the landscape whatsoever. Borders of ownership, long recognised by tangible natural features, were now determined by straight and invisible lines. For First Nations, the survey of the prairie plains marked the end of an era of nomadic freedom and economic self-sufficiency. Before settlers were given free rein to occupy the newly surveyed lands, reserves were set aside for specific groups of people. Treaties arranged with First Nations groups set land aside for their use, and certain areas were designated as Métis reserves.

In 1879, the government approved the appropriation of 100 million acres of land, which railway companies could build on or sell. In 1881, this translated into reserving every odd-numbered section for 24 miles to either side of a line drawn across Manitoba and the North West Territories for the Canadian Pacific Railway's use.

The HBC, in its deeds of sale, reserved the ownership of five percent of Rupert's Land. This reserved almost two sections per township for their use or sale: all of Section 8 and three quarters of Section 26. In addition, two sections per township were reserved as school sections. This left just over 44% of each township available for homesteaders to claim. Settlement began in earnest following 1880 and settler hopefuls in the Souris Basin and Turtle Mountain areas registered their claims with George Newcomb at the Old Deloraine Land Titles Office.

Kaye, Barry. “The Historical Development of the Cultural Landscape of Manitoba to 1870.” Welsted, Everitt and Stadel 79.