One night in late September 1923 the town of Melita came to life with the pealing of the alarm bell in the middle of the night. As townsfolk stumbled onto the street to survey the scene, it was clear that it was already much too late to stop the robbery that had just taken place on Main Street. 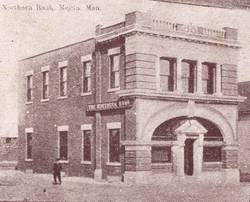 The Northern Bank was the scene of the robbery in 1923. It still stands in Melita today.

When a group of six to 10 bandits first entered the town in the very early hours of a Saturday morning, everything was silent. They headed first to the town's power station. There they bound and gagged the night engineer to prevent him from turning on the street lamps. Then they cut the telegraph and phone lines, leaving the town cut off from the rest of the world.

Breaking off the heavy lock on the front door, the group of robbers entered the Union Bank of Canada on Melita's Main Street. Without making an attempt at silence they began working at the vault door with a hammer and chisel. The racket woke up one of the bank tellers, E. W. McKerlie and his friend, Fred Watts, whose beds were directly above the vault. They called down to the people they heard below and received the reply that if they kept quiet they wouldn't be hurt. Spooked by the activities going on below, the two men ran downstairs and were escorted by an armed robber down the street who kept watch over the lane to the rear of the bank.

Almost directly after Watts and McKerlie left, the first of eight explosive charges was fired off. The floor of one compartment of the safe was blown off, and from there the bandits heisted about $7,700 dollars in cash, plus some $90,000 in securities.

Waking Up the Whole Town

The explosions woke up the Chinese storekeeper, Wong Dick Hoe, whose home was located above his shop just north of the bank. Thinking that he was the one being robbed, Hoe tried to go out the back door. He ran into a gunman who was guarding the back lane and ordered him back into his home. Walter Waite, two doors north of Hoe, woke up swiftly following the charge blasts. He saw that the blinds at the bank were suspiciously drawn and heard the exchange just down the street as the gunman ordered Hoe back into his home. Sensing that the back door was probably being watched, he took off his shoes and crept outside and up the back lane to the top of Main Street. He crawled across the street to avoid silhouetting himself against the sky to reach the fire bell.

As the bell pealed out over the town, townspeople came out to see what the excitement was all about. The local newspaper editor was first on the scene. The bandits fired a few shots to intimidate him and one shot caught him in the foot—this was the incident’s only reported injury. By the time a crowd drew around the scene the bandits had made good their getaway. An alarm was sent out from the top of a power pole, only 15 minutes after the fire bell was sounded, but it was too late. It was speculated that the bandits headed straight for the American border. Because of the darkness, Watts and McKerlie could give only vague descriptions of the men’s appearances.

The bank was insured against all losses.

The stately bank building that was the scene of the 1923 crime still stands at the corner of Front Street and Main in Melita. Though today it houses municipal offices, the building served as a bank for over 60 years.

The Northern Bank built the two-storey brick building when they decided to open a branch in Melita in 1906. The building showcases a variety of architectural styles and changed hands several times during its lifetime. While being used by the Union Bank, major renovations and an expansion in 1958 made it possible for operations to continue in the building for the following ten years. In 1968 banking activities moved to a newer building.