The Mountainside Store is an eye catcher, no doubt about it, and it’s hard to miss while driving down Mountainside Road. For years I have passed this building – even pointed it out on my heritage tours – without knowing when it was built, by whom, and most of all: why it was painted.

These questions, and more, were easily answered once I found the right people to ask. In the fall of 2012 I sent a couple of my board members to interview Ben Arde who had owned and operated the Mountainside store for 14 years in the ‘50s and ‘60s. This interview left me aquiver with more questions and in January 2013 I contacted three generations of the Black family: Ethel Black was born and grew up in Mountainside, her son Larry Black spent his childhood there and his son David Black owned and lived in the Mountainside building in the early 2000s. 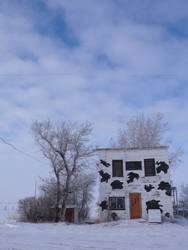 The Mountainside Store was painted by Dave and Ashley Black, dairy farmers who were using the top floor as a residence at the time.

Before the story of the Mountainside store began, another general store operated in the village. This early store burned down, probably in the early 1900’s. The general store that exists to this day was built by Walter Tabberner sometime before 1927—at least the store was already in place when the Mountainside School was constructed in that year. Tabberner built the school with the help of Ethel Black’s father, Albert Truax, who at that time was about 15 years old. By the time Ethel was attending school – 1943 – Walter Tabberner had sold the Mountainside store to Ed Tufts.

Ethel remembers the layout of the general store: the north wall was where the hardware was sold and the south side featured a long counter with the till and shelves from floor to ceiling behind it. Beside the till was a book into which every purchase was recorded and customers were given handwritten receipts. A potbelly stove warmed the building. In the northwest corner of the store was the post office and mail room.

Children attending next-door Mountainside School often visited the store at lunchtime or after school to pick up mail and groceries for their families or to buy treats for themselves. Children then didn’t have much for disposable cash, but a penny in those days could buy a handful of candies.

Ben Arde took over the store in 1949 (see Ben Arde: Mountainside Store Operator ) and operated it for 14 years. Ben sold the store to Mike and Adeline Michaluk in the early 1960s and Mike kept the store running for a few years after that. Larry Black remembers Mike setting up a refreshment stand at school picnics. Mike and Adeline soon stopped operating the store but continued to use the upstairs as a residence where they raised their three children. After the school closed in 1967 the lower floor of the store was used for community events. By this time, though, the railway through Mountainside had stopped operating and many people were moving out of the community.

Mike worked for Drings in Boissevain (the precursor to Western Archrib), and he built a small room onto the west end of the store to use as a “glue room” for the furniture he built on the side. He installed a bathroom in this room, also. Mike stayed in the store until he died in the late 1990s. Adeline had moved out a few years before, after getting tired of walking up and down the stairs all the time.

In the year 2000 Adeline was ready to sell the store. She put an ad in the paper, asking for bids on the place. At the time David Black was dairy farming with his parents, Larry and Sue, but wanted to have a place of his own nearby. There were few rural options available, so he put in a bid for the building. Adeline was glad to sell it to him, happy that someone else saw value in the building as a home.

The place was in pretty rough shape when Dave moved in, as it had been empty for a year of two. He knocked out a wall upstairs, painted and put in some carpet to make the place more comfortable. The space suited his needs—it was his first home away from his parents.

Dave lived in the building for over five years. In 2004 his fiancée Ashley joined him. Ashley was good natured in her acceptance of the store, saying “I think everybody’s first home should be memorable.” They lived on the top floor, where there were two bedrooms, a kitchen, a living room and a bathtub. A combination of single-pane windows and old wood chip insulation made the building difficult to keep warm. The wood stove was in the same room as the bathroom, on the main level. They later replaced the wood stove with a wood furnace made out of an oil drum, to keep the winter cold at bay. The building was far from airtight, and it wasn’t uncommon for a mouse or shrew to run across the floor. The bottom level was used for storage, laundry and a workshop. They didn’t use the basement.

The idea of painting the store occurred to Dave and Ashley while on a trip west. The building needed a paintjob anyway, and they thought a Holstein cow design would be a hoot.

When the winter of 2006 started approaching, Ashley felt that it was time to move. She had loved starting her life with Dave in the old store, and— though it had its quirks—good memories had been made there. But the thought of staying for another winter was not an attractive one. They moved out to another property close to Dave’s parents and sold the store to Metro Klym. Metro was attracted to the building for the same reasons as Dave: it was an opportunity to live rurally.

Metro continues to live in the building today. He is a self-employed carpenter, and has put energy into renovating parts of the building. Metro has made the bottom floor habitable and uses both storeys as a home for himself and his brother.

Dave and Ashley have always been under the impression that the building had been built in 1913, but they don’t remember where they heard this from. If they are correct, then this building is seeing its 100th year this year!