Safeguarding a forest for generations to come

To the incoming settler of the 1880s and 1890s Turtle Mountain was a gold mine of building materials. After all it was the only densely treed area for miles around. Settlers flocked to the mountain to cut timber for buildings, fenceposts and wood for fuel. A handful of sawmills operated, turning Turtle Mountain trees into the materials of progress. And while there appeared to be an endless supply, little care was taken: as early as the 1890s it was clear that unstructured and wasteful logging on Turtle Mountain would soon leave the region destitute of timber. 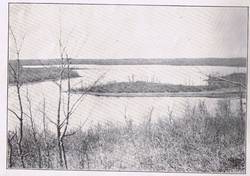 Oskar Lake after a fire.

Direct logging was not the only threat facing the forest—another major danger to the woodland was fire. From the time settlers first began building homes in the area, not a year passed when the forest was not threatened by fires caused by lightning or human negligence. Fires in 1879, 1881 and 1885 left their mark on the landscape, but were minor in comparison to the fire of 1897. In this year a blaze from the North Dakota side of Turtle Mountain devastated almost two entire townships (72 square miles). The forest had just begun to make a recovery when another fire blew over the mountain in 1903. The islands in Oskar Lake and Max Lake escaped the fire and are the only examples of mature deciduous forest on the mountain. They are home to some of the oldest oak trees in the province.

A Movement to Restrict Timber Cutting

It was the prerogative of the railway which caused action towards preserving the timber resources on Turtle Mountain. The Brandon and Southwestern Railway (builders of the Great Northern line from St John, North Dakota to Brandon) asked the government to restrict timber cutting on the mountain to ensure that they would have a certain supply of ties for the construction of their railway.

In 1895 the Minister of the Interior set aside 75,000 acres as the “Turtle Mountain Timber Reserve.” The acreage was reduced slightly to 69,920 (equal to almost four townships) when in 1906 the Dominion Forest Reserves Act was passed and the Turtle Mountain Forest Reserve was established by an Act of Parliament. The land covered by the reserve was a rolling arrangement of forest, lakes and sloughs. Waterbodies made up a full third of the total area.

In 1897 a fire ranger was appointed to watch over the forest, and in 1911 an official ranger’s headquarters was built north of Lake Max (a stone’s throw from where the Lake Max Sawmill had operated). In 1912 a telephone line connected the residence to Boissevain, making it possible for the ranger to call in case of emergency.

Measures were taken to ensure that the forest would remain healthy while continuing to provide resources and a recreation centre for surrounding communities. Timber could only be cut with a permit and was restricted to certain areas. Burning was restricted around the reserve, and roads and trails were built to facilitate access to a blaze if one was to occur. Ground was also made available for cattle to pasture, a practice that was encouraged to eliminate the fire hazard of dry grass and thick undergrowth.

The PFRA And Provincial Park

In 1930 the reserve came under provincial management. The province began stocking some of the larger lakes and encouraged recreation within the area. In 1959 the eastern block of the reserve was designated as a community pasture under the Prairie Farmer’s Rehabilitation Act (P.F.R.A.). This area continues to provide a common grazing ground for local farmers.

The Turtle Mountain Provincial Park became one of Manitoba’s first provincial parks in 1961, and covers just over two townships (184 square kms) of what was the Turtle Mountain Forest Reserve. Today the park is managed according to principles of sustainable development: visitors have access to 150 kms of trails in addition to camping and fishing facilities. The park is also engaged in oil and gas exploration.