After the Verona School District was formed in 1885, a small school building was constructed about four miles northwest of Waskada. The building measured 18 by 24 feet and was constructed by Temple Brothers of Waskada for a total of $78.00. The first teacher to teach in Verona School was Mr. A. F. Higgins who began his duties in the schoolhouse on April 10th, 1886. 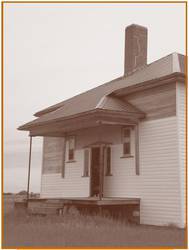 Where Shall it Be Located?

The initial location of the school was unsatisfactory to locals and board members. It was felt that the the school was not in a central enough location. In 1891 it was moved for a total of $25.00, and a porch was added for an additional $25.00. It was moved again eight years later, in 1897, and the single acre the school was moved onto cost $10.00 to purchase. Here the school grounds remained, though in 1918 the old building was sold and moved off the property and a new schoolhouse was built for $3500.00—quite the difference from building costs 30 years before!

The old building was typical of schools built in that era, with three windows to each side, and a woodshed attached to the back. Indoors, there was one blackboard, a potbelly stove in the centre of the room, and small coal oil lamps that sat in brackets on the walls. Students sat in double desks on benches and wrote their lessons on slates with squeaky slate pencils. There was also a globe suspended from the ceiling on a pulley that could be pulled down when in use and otherwise kept out of the way. The new school that was built in 1918 was quite a bit larger with a full basement, coal room, store room, cistern, indoor toilet, and furnace. It was built in a design becoming popular at that time with houses in the area.

The subjects studied in Verona were grammar, composition, geography, history, agriculture, and art. Often on Fridays during the last hour of class a spelling bee would be held. The grade eight entrance exams had to be taken in Waskada and geography maps on the exam were expected to be hand-drawn from memory.

Activities at the school were many and varied during its lifetime. Of course, the Christmas concert every year was a huge highlight, especially a memorable one in the early 1930s which featured a seven-piece orchestra made up of violins, guitars, an organ and a banjo. School picnics were carried out in fine weather and once a year the students took the train from Waskada to Deloraine to take part in the track and field day.

The schoolhouse was widely used by the community, especially for church services every Sunday. Dances that were held there often went from 9 p.m. to four in the morning. Over the years, many shows, concerts and wedding showers enjoyed the space and the building's central location.

Today, Verona School sits on its acre of prairie land with the shadow of the “Head” of Turtle Mountain rising behind it. Cobwebs drape off the double desks sitting in the basement and a thick layer of dust dampens any noise. It stands as a memory of years past and reminds us of the times and how they change.