Sam Long and John Fee were the first European settlers in the Hartney area. Early in 1881, they made their way from Portage La Prairie to settle in what would be the Melgund district. They built a sod shack and set about breaking sod and putting up hay. While they went to Winnipeg and Brandon to work for the winter their shack became crowded as more settlers arrived in the area and moved into the only existing shelter. Before spring 1882 the small building was the temporary home of 17 people. 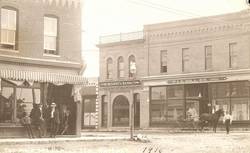 James Hartney's interest in the area began later in 1881. He bought two sections of land and hired labourers to work it before he moved to the area in 1882 with his family. He imported a carload of Red Fife wheat from Minnesota and after reserving enough for his own crops sold the rest to his neighbours. By 1882 he had a good wheat crop, thus beginning the district's reputation as a first-class wheat producing area. His success attracted more settlers and Hartney's farm became the centre of a new community. He was soon granted the right to open a post office which he named after himself. He also set up a store, first operated out of his home and later in a separate building. He brought men into the community to operate this business as well as a blacksmith shop that he later established.

By 1884, settlement was well under way and families began moving into the area, joining fathers and husbands already established. Rough shanties were added on to or replaced by framed structures. In these early years people gathered on Sundays in their homes for Bible readings and hymn singing. As settlement increased, these gatherings became denominational and were held in the school.

When the Canadian Pacific Railway (CPR) survey was made in 1889, a station named “Airdrie” (after a town in Scotland) was established on the section to the north of James Hartney's homestead. The community centre that had grown around Hartney's farm shifted a half-mile to this new townsite where the road running parallel to the railway became the main street.

Hartney's first school was outside of town and named Webb after the person who owned the land the building was on. Children walked to and from school, some having to cross the Souris River regularly. The Magwood children crossed the river in a rowboat before having to walk a further two miles to school every day. Children living in town would meet the teacher, Mr. Forrester, in town and walk to school with him. In 1892 school activities moved into town after a classroom was opened above the newly built implement and lumber store. In January of 1898 the school district's name was changed from Webb to Hartney.

During the winter when farmers were not busy on the fields, trips to Turtle Mountain to collect firewood occurred regularly. The trip began at four in the morning and a full day of driving was put in to cover the 40 miles (64 kms) to Turtle Mountain before camp could be struck. The next day the horses rested while the men cut wood and loaded it onto sleighs. On the third day, the trip home began long before sunrise with a home arrival time between eight and eleven o'clock, depending on road conditions and weather.

With time, the town grew and flourished, changing its name from Airdrie to Hartney and adding a second railway, the Canadian Northern, in 1900. By 1904, in addition to being the home of eight operating elevators and 10 clergy members, 51 businesses were listed in the town newspaper.

Argue
(1898 – 1961) Argue was known as "Trackend" for a year as it was the most westerly station on the Winnipeg-Carmen-Hartney Branch of the Canadian National Railway until 1900 when the line continued to Hartney and Virden.
CNR Hartney-Carmen-Winnipeg Branch to Argue
(1898 – 1961) The CNR was built as far as Argue in 1898. Argue was known as “Trackend” while the future course of the line was debated. Delegations from Deloraine, Waskada, Melita and Hartney lobbied for the route to go to their respective towns.
CNR Hartney-Carmen-Winnipeg Branch to Virden
(1905) The CNR built a bridge over the Souris River and reached Grande Clairière in the fall and Virden by Christmas.
CPR-Estevan Branch to Hartney
The Estevan Branch of the Canadian Pacific Railway reached Hartney from Brandon in 1890.
CPR-Estevan Branch to Saskatchewan
The Estevan Branch of the Canadian Pacific Railway reached Melita in 1891 and continued to the Saskatchewan border.
Hart-Cam Museum
The old general store that houses the Hart-Cam Museum has been a movie set for two Hollywood films.
Hartney
(1882 – Present) Hartney is a town with a vibrant history, pleasant present and bright future!
Hartney Campground
Located next to the pool and playground in Hartney. PHONE: In summer: 204-858-2167. Otherwise: 204-858-2429. EMAIL: hartney@mts.net VISIT: http://www.hartney.ca/default.asp?fxoid=FXMenu,3&ID=10&sub_ID=213&sub2_ID=135
Hartney Consumer’s Co-op
Groceries and Bakery items. 201 E Railway St, Hartney PHONE: 204-858-2276
Hartney Lumber Supply
Gas pump and lumber supplies. 204 River Ave. PHONE: 204-858-2014
Hartney Motor Inn
301 River Ave, Hartney. PHONE: 204-858-2525
Métis Trading Post
(1840s) A Métis fur trading post operated here on the Souris River for a short time in the 1840s.
Prairie View Cemetery
(1901-1910) A small cemetery once existed on this site.
Red Door Cafe
Lunch specials, amazing pie! 237 E Railway St, Hartney. PHONE: 204-858-2313
Webb School
(At least 1884- about 1892) Webb School became Hartney School.
Whitewater School
(1884-1961)
Yellow Quill Trail
(Pre 1790 - 1886) The Yellow Quill Trail began as a trade route used by First Nations but served as a convenient avenue of travel for pioneering Europeans as well.