Take in a gentle view over the prairie towards Whitewater Lake from a point on the now obliterated Mandan Trail.

Before – and shortly after – Europeans made contact with aboriginal peoples in the Turtle Mountain area, a First Nations group called the Mandan traded in the region. Artifacts such as grinders and pestles that have been found in the area were used exclusively by the agricultural Mandans and prove their trading presence in this area at one point. There is a possibility that they may have formed settlements in the area for some time as well. 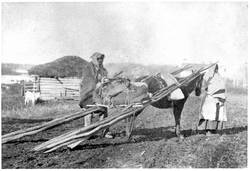 Pictured here is an example of a horse-drawn travois, used for transporting goods and belongings. The impression of the Mandan Trail was carved by the passing of many travois. CREDIT: Manitoba Culture, Heritage, Tourism and Sport

The Mandan people lived in permanent, fortified villages and are best known for living along the Missouri River where they were heavily involved with agricultural production and the raising of horses. The horses they raised were of desirable quality and became much sought-after stock by fur trading companies.

Mandans and the Fur Trade

The first of the Brandon fur trading posts along the Assiniboine River was established in 1785 and these posts became outlets for Mandan agricultural products such as corn, beans, tobacco, and – most important of all – horses. Trading expeditions travelled regularly from the Assiniboine River southwest across the plains to the Missouri River and the Mandan villages, using several trails. One of the main routes skirted the western slopes of Turtle Mountain and has come to be known as the Mandan Trail. This was the route used by Mandan people themselves on trade expeditions and later by the Red River carts of fur traders.

The explorer LaVérendrye used the Mandan Trail on his expedition in 1738 to visit the Mandan villages along the Missouri, thus the trail quite possibly existed prior to the fur trade era. The impression of the trail was created by the varying widths of the First Nations' travois; a method of transporting furs and personal belongings using the muscle power of a dog or horse. The land in and around the trail was also likely a migration route for bison, thus the path would have been heavily used by First Nations in their pursuit of the animals on which they subsisted.