The first Marsden School was built in 1908 by James Flynn, a contractor from Deloraine. It was constructed on the firebreak trail bordering the western edge of the Turtle Mountain Forestry Reserve. As it was built on top of a hill and could be seen for miles, it became a landmark of the area.

The school district of Marsden was very long and narrow because the forestry reserve took up most of the eastern sections in the division. The district extended south to [Lake Metigoshe and the Canada-US border, and north of the school for about three miles (5 kms). It was difficult for some children south of the school - many of them Metis kids living near Lake Metigoshe - to attend because of the distance – for some it was up to five miles (8 kms) away. As it was, most of the early settlers of the area were from the United States and nomadic in nature. Families were always coming and going and thus a consistent or high attendance at the school was never possible. 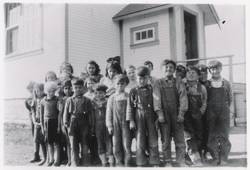 A class photo taken in front of Marsden School No. 2 sometime in the early 1940s. CREDIT: Mary Conway's Archival Collection

Mr. Hunter was a key promoter of Marsden School No. 2 being built, due to his concern for the children that were not able to attend Marsden No. 1 because of the distance. Marsden No. 2 was built three miles (5 kms) to the south of No. 1 in 1938 by the Gooselin brothers with the help of neighbours. The log building did not prove to be warm enough in the middle of winter, so two years later it was sided with lumber. Both Marsden schools were heated by pot-belly stoves and administered by the same board.

Marsden No. 1 was attended by children of European settlers living on the level farmland to the north, whereas Marsden No. 2 was attended by Métis children living in the bush around Lake Metigoshe. The school became an important feature to the Métis community and helped local people affirm their heritage in this area by being its only Métis school. It doubled by serving as a community centre and dance hall as well.

The smaller school in the south was blessed to have very good and dedicated teachers. Syd Morris was the first teacher at Marsden No. 2, and he remained for the first two years. Later, Nick Symenchuk of Winnipeg came to teach. He conducted night classes for parents in the district who wanted to learn to read and write. Mrs. Howie was teacher for some time and taught the girls how to knit.

The annual school picnic held in June was always popular and well attended by whole families, as were the Christmas concerts in December. At field days, the Marsden schools would join together for the parade when numbers were low at both schools, though each went with its own baseball team.

Both Marsden schools shut down after Manitoba rural schools were consolidated in 1966, and the children were sent by bus to schools in Deloraine instead. The swift change from attending a small school to a large one where the Métis children were a minority was a stressful and drastic experience for many.