The Red River Métis began their organised bison hunts soon after 1820. It didn't take long for the hunts to become a central feature of the Métis way of life as they provided the Métis with their principle source of income for several decades.

As the glaciers of the ice age receded, bison and other animals began to move in to occupy the plains. For centuries bison were the undisputed rulers of the plains which they occupied because of the rich grazing. Conservative estimates by early explorers put the animal's population above 70 million. Some Nations, particularly the Dakota and Assiniboine, relied primarily on the bison, utilizing every part of the body and carcass. Others, like the Ojibwa and Cree, used bison to complement more diversified hunter-gatherer lifestyles.

Bison meat played a crucial role in the success of the fur trade as well. The meat was condensed into pemmican (along with fat and berries) which traders and trappers carried with them as a highly nutritious and easily transportable staple. In 1821 the two largest fur trading companies in the West, the Hudson's Bay Company and North West Company, amalgamated. Many Métis working for the companies were released from service and settled in the Red River Settlement (present-day Winnipeg). Many of these ex-traders had served at trading posts on the plains where they had become familiar with plains First Nations' lifestyles. The Métis began to conduct bison hunts of their own, similar to the First Nations' operations except that they transported their kill in Red River carts. 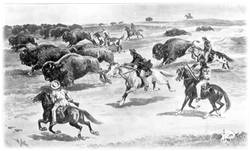 An Illustration which catched the thrill of a Metis Bison hunt. CREDIT: Manitoba Culture, Heritage, Tourism and Sport

Around 1820 when the hunting expeditions began, 540 carts were involved. The passing of several decades saw these numbers grow to 820 and reach its peak in 1840 with a record of 1,210 carts. There were two organized hunts every year: a larger one in summer and a smaller one in autumn. For days in advance of a hunt the Red River Settlement would shut down as preparations for the expedition were under way. After everyone was gathered the rules and regulations for the hunt were laid down with solemnity – and woe betide him who broke these rules, for they were taken very seriously. The officials of the hunt were also chosen before the five- or six-mile train (eight to 10 kms) of Red River Carts set off in search of the bison.

After days or weeks of travel, the hunters would sight a herd and the hunt was pursued with strict attention to the regulations. The hunters descended on the herd in early morning but didn't fire a shot until the senior officer gave the signal. Hunters readied themselves by filling their mouths with bullets so they could reload rapidly – men had to develop great skill to be able to shoot continuously from the saddle. When the hunters were within half a mile the solid black herd of bison would begin to stampede across the plains. After the signal was given complete mayhem followed as the earth trembled under thousands of fast-paced hoofbeats and the air was filled with dust, shooting, and yelling. The high-paced pandemonium usually lasted for only half an hour before the women brought the Red River carts in close and began working the skins and cutting up the carcasses of the slain animals. The meat had to be dealt with quickly before it spoiled.

The End of an Era

The widespread use of fire arms by the US cavalry, European sport hunters, and Métis hunters facilitated the opening of the prairies – first to the fur trade, then to settlement – while the bison population fell sharply in the face of the gunfire. By 1874 the bison had been driven out of the Souris plains and into western Saskatchewan. The Red River hunting expeditions grew smaller as they had to travel for weeks before they came into contact with the animals. Today, wild bison have disappeared from the plains entirely. A few are kept confined in parks or on farms for display or to prevent their complete extinction.

CPR Lauder Branch
(1912 – 1962) The Lauder Subdivision, also known as the “Blue Flea” Line. The Tracks were removed in 1975-6.
Dand
(1913 – 1962) Dand was a station on the CPR's “Blue Flea” line which grew into a small community.
Dand School
(1919-June 1970)
George Morton's Cheese Project
(1882 – 1883) George Morton launched a cheese-making project west of Whitewater Lake. He may have been successful if he hadn't overlooked a couple key factors . . .
Quaker Church
(1899 – 1948) The Chain Lakes Friends Meeting House operated here for 50 years before being moved to Dand and renamed the Dand United Church.
Quaker Church Cemetery
(1899 – 1948) A small cemetery exists beside where the Chain Lakes Friends Meeting House once stood.