Before 1840, many Métis made their living by hunting bison on the plains during the animals' summer and fall migrations. Hunting parties left from the Red River Settlement to harvest hides and meat and returned with the onset of winter. As the bison retreated westward (due to humans occupying more and more land to the south and east), hunters had to ride for hundreds of miles before they came in contact with the animals.

As beaver populations were being depleted, bison hides became increasingly important to the fur trade, especially to the traders along the Missouri River. A bison robe harvested in summer was next to worthless, but between November and February when the coat was thickest, the robes could fetch a very handsome price. Bison robes, in addition to being used as throws, bedding and wraps, could also be manufactured into coats and boots. The Métis took full advantage of this economic activity and began establishing impermanent wintering communities on the prairies close to bison wintering grounds. The hunters chose sheltered sites where water and fuel could be found in abundance to last them through the winter, thus areas such as Pelican Lake, Turtle Mountain, Whitewater Lake, Souris River, Lauder Sandhills, Oak Lake, and places farther west became popular camping places. 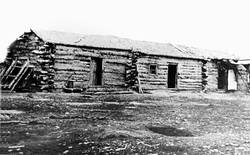 The hunting communities varied in size; some only several families large, others with populations that reached 1,000. Métis families congregated in these communities for convenience as well as for safety and protection due to the presence of competing First Nations, such as Dakota and Assiniboine. The villages were made up of roughly built but sturdy huts which provided sufficient protection from winter weather and harsh temperatures. It often took no longer than a day or two to construct such a hut with the aid of a single axe and a knife. Wealthier traders would often have multi-room dwellings which were used to house religious services and dances. These social activities were the main source of entertainment throughout the long winter of hunting, processing and tanning hides and making pemmican. 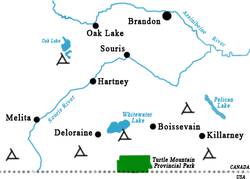 The general locations of the some of the wintering communities that existed in southwest Manitoba. CREDIT: Adapted from John Welsted "Geography of Manitoba"

A wintering community generally consisted of hunters and their families and a few Métis fur traders. The leader or chief of each community was often the most accomplished hunter or main fur trader. In the 1850s and '60s, a missionary priest was often present as well, and he frequently assisted in leadership duties in addition to aiding in the relief of social discord, the presence of which could challenge the integrity and effectiveness of the community altogether.

Buildings were usually constructed in late fall in preparation for winter and abandoned in early spring. Sites of past communities were not generally returned to year after year because of changes in the bison's wintering range, and also due to the fact that rival First Nations would often burn the buildings to the ground as soon as they were unoccupied. New camping places were chosen every year.

At least until the 1860s, Métis hunters returned to the Red River each spring to sell their robes before returning to the prairies for the summer bison hunting season. As the bison disappeared in the late 1870s, wintering communities lost their economic function and most of them simply disappeared from the prairies, with the exception of a few that made the successful switch to agricultural communities. Métis hunters either started up homesteads of their own, joined First Nation bands or settled in other established communities.